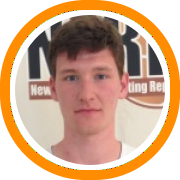 After narrowly escaping their first two games on Wednesday night, the Middlesex Magic returned to Competitive Edge Athletic Complex to score three more wins on Thursday and capture the Hoop Group Summer Classic East championship.
Jackson Donahue averaged over 24 points per game in the five wins while he and Collin McManus both attracted their future teammates from the UPenn basketball team to come out and support their efforts in the championship game.

Neither player disappointed as Donahue went off for 36 points in the final while McManus anchored the defense with 15 boards.

Rising junior forward A.J. Brodeur had a terrific showing as well, averaging over 18 points and 12 rebounds while showing increased explosiveness inside the paint on both ends of the floor.

But perhaps no other player benefitted more from the title run that Beaver Country Day graduate and incoming Worcester Academy post-graduate Jeff Spellman who handled the ball against pressure, showed his athleticism in the open floor, and made his typical shots.  He finished with 13 points and 11 rebounds in the championship game.

Rising Bridgton Academy post-graduate Phil Leotsakos provided his typical toughness and tenacity while also serving as the team’s primary defender.  Trevor Dow’s length and shot-blocking was critical to the frontline off the bench while Mike Stamas provided a similar burst in the backcourt.

The Magic relied on a pair of underclassmen, Matt Donahue and Matt DeWolf, to fill the void left from injuries to Tim Preston and Rohan Shukla who were both unable to compete this weekend.  Donahue showed the family trademark shot-making ability while DeWolf was a post presence on both ends of the floor.

The Magic remain in Pennsylvania throughout the weekend to take part in the Hoop Group Summer Jam Fest.