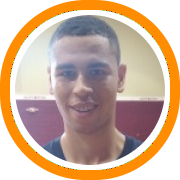 MacDuffie School post-graduate big man Malik Eichler committed to the University of Detroit on Tuesday afternoon following an official visit to their campus over the weekend.

A native of Germany who was born and raised in Berlin before coming to the United States for his post-graduate year, Eichler is nearly seven-feet tell with a versatile inside-out southpaw skill set.

It took him some time to adjust to the speed and physicality of the American game but he made consistent strides during the course of the year and hasn't come close to realizing his full potential just yet.

Detroit Mercy is a division I school that competes in the Horizon League. Longtime Michigan assistant Bacari Alexander was named the Titans' new head coach earlier this spring and if he incorporates the same style of play he learned under John Beilein it should be a system that Eichler can thrive in long-term.

Eichler becomes the third MacDuffie product to accept a division I scholarship in recent months following in the footsteps of Kashaun Hicks (Central Connecticut) and Jordy Tshimanga (Nebraska).

Below are some of his highlights from this past season: