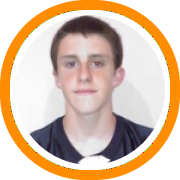 The New England Recruiting Report was at the Rockingham Athletic Club on Saturday morning checking out all the young talent that was on hand for the New England Junior Elite Championships.  Here is a look at who stood out in the u12 – u14 divisions.

Aaron Falzon, Boston Blue Chips – He stands head and shoulders above the competition, literally, and has the skill set to match his size.  He grabbed rebounds left and right, stuck threes in transition, and blocked some shots at the rim to contend for triple-double status.

Ben Judson, Mass Rivals – Judson is very athletic and scores the ball both inside and out.  He was getting it done on the defensive end as well, guarding the ball tough, and making the extra pass on the offensive end.

Anthony Salome, Guardian Basketball Club – Salome scored at will in the early session while still controlling the tempo of the game.  He never turned the ball over, played good defense, distributed the ball very well, and showed the ability to finish anywhere around the rim.

Coby Antwi, Boston Blue Chips – An extremely athletic two way player who was very active with a good motor.  He was relentless on the defensive end and at his best in the open floor offensively, attacking the rim and making plays.
Terrance Mann, Visionary Basketball Club – A great all-around player who shot the ball fairly well but was absolutely dominant on the offensive glass, overpowering people and finishing through contact.

Wabissa Bepe, Visionary Basketball Club – A u12 standout, Bepe was pretty much unstoppable on Saturday morning.  He got to the rim at will and never failed to make a play when his team put the ball in his hands.

Jackson Donahue, Rhode Island Hawks – Donahue opened his first game with three consecutive three-pointers and quickly forced the opposition into a box and one.  A cerebral point guard, who runs the team as well as he puts the ball in the basket, Donahue is the total package.