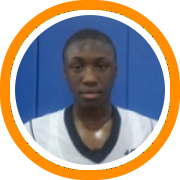 GAMES OF THE DAY

The Spirit Lake Warriors full court press gave the Rough Riders trouble early in the first half, but the Rough Riders figured the press out and were able to get easy looks to take an early lead at the end of the 1st half. In the start of the 2nd half, the Warriors pushed the tempo with a change in their press to 1-2-2 and went on an 11-0 run to recapture the lead. It was a seesaw battle the rest of the way through with an abundance of lead changes.  With the score knotted at 51 all with a 1:27, CT Rough Riders’ Elijah Robinson’s and-1 lay-up gave the Roughriders a 2pt lead.  The Warriors would fight back and force the game into overtime.  In the extra period the Warriors reigned supreme with an overall team effort to win the game 61-57.  Dom Benson finished with a team high of 13 points for the Warriors.  Robinson finished with 18 points.

A nail biter throughout the whole contest, both teams battled for an advantage on the scoreboard. Bishop Elite’s attack was led by Kabongo Ngalakulondi, an all-around player who can shoot the 3, and lightning fast guard Oumaru Kante.  Elite owned a three point lead with 12 seconds left in the contest.   G.B.L.’s Sequan Hinds had the ball with 3 seconds to go and made what would have been a game tying three, except his foot was on the three-point line and was ruled a two pointer.  Elite would hang on for the victory.

After a dominant first half by the Hawks, the Warriors clamped down on defense and took the lead with 5 minutes to go in the game. The stellar play of the Warriors big man, #28 Deontavius Parker was instrumental to their comeback, altering shots, cleaning up on the glass and scoring on put backs. The River Hawks would rally back from their own 8 point deficit to go up 1 with the game with 42 seconds to go.  With 20 seconds left, #23 Isaiah Cunningham broke down the defense to give the Warriors the lead.  With the game on the line, the River Hawk’s Tanner Dyslin drove down the lane for an and-1 lay-up that would end up being the last points of the contest and securing the win for the River Hawks.

The Rage ran out to an early lead steered by #4 Jake Arcouotte, a combo guard who likes to penetrate and dish.   The Rage jumped out to a twelve point lead in the beginning of the 2nd half, but the Warriors came charging back behind twin brothers, Phillip Thomas, who scored the next 9 Warrior points, and River Thomas, a guard with a knack for scoring the basketball.  The teams battled back and forth for the lead.  With 1:42 on the clock and the score tied, Arcouotte made an and-1 lay up to put his team up by two. The teams continued to trade buckets.  With 15 seconds on the clock and the game knotted at 62, Arcououte passed to teammate Jeff Czapla who broke the Warriors press for an and-1 lay-up, which would seal the game for the Rage.  Arcouotte finished with 17, while the twin tandem of Philip and River finished with 14 and 24 respectively.

The Western Ct Warriors started off on fire and remained that way for most of the game. The Warriors were led by a strong performance from Trekel Douglas who dominated the glass and scored with ease in the paint.  Nate Rubinstein also provided a spark for the Warriors, hitting 4 3’s in a row.  The JC Ballers started two underclassman Anthony Mack (7th Grader) and Brian Brook (8th Grader).  Brook finished with a team high 18 points.

This game came down to a matchup of the guards.  The Bulldogs’ Denzil Woolard shot the ball well and finished with a game high of 15 points, but it was the Shooting Stars excellent shooting that helped secure the win.  Shooting Stars’ Eugene Meleshkevich displayed his 3 point shooting ability and ended with a team high 13 points for the game.

Mass Elite’s Sam Traicoff shot the ball well for Mass Elite, but it was Bishop elite’s guard Tshiefu Ngalakulondi and big man Malo Rowmraj who stole the show and brought Bishop Elite to victory.  Rowmraj was an offensive rebounding machine, cleaning up every shot missed by his teammates, while Ngalakulondi got to the basket and scored at will.

CT Roughriders’ Elijah Robinson was the most impressive talent on the floor Saturday.  Robinson is an inside-out player that can do just about anything on the floor, but plays to his strength and doesn’t try to do too much.  Robinson buried 3 three’s and was aggressive driving to the hoop, but what really stood out was his pursuit of the ball, whether it be a loose ball or a rebound, he always seemed to come up with it.  Although his team was unable to get the win, he still wowed the crowd with his versatility, from penetrating, to blocking shots, to stepping out and nailing 3 pointers.

Other Players to Watch

Chaz Oates, HS Western CT Warriors Fast guard who likes to drive and kick. Finishes at the rim with ease, but likes to get his teammates involved as well.

Ed Lawrence, HS Western CT Warriors  a Legit 7 footer who runs the floor well. He had three dunks and an abundance of blocked shots. finished with 18 points.

Brian Brook, 10th Grade JC Ballers Brook is a very fast guard that is hard to defend in the open court.  He finished with a team high 18 points and was still able to stand out while playing in an older age group.

Majak Wenyin, 10th Grade Bishop Elite Wenyin is a lanky wingman who can put the ball on the floor and attack the basket.  Finishes in transition and see’s the floor well.

Dominique Elliott, HS Bristol Ballers An attacking player who knows how to put the ball in the basket and get himself to the free-throw line, finished with a team high 22 in the opening game of the day.

Zack Gruttan, 10th Grade Bishop Elite Gruttan is a big body who can bang in the post with the best of them and can also step out and knock down midrange jumpers.

Devon Ortiz, CT Premiere Ortiz can really shoot it from beyond the arc.  Hit 6 3’s to keep his team in the contest.