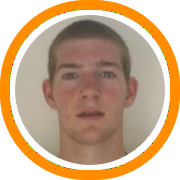 When Jon McAllian arrived in Orlando with his Team Maine AAU squad he was already receiving some division I interest.  But after knocking down 7 three-pointers in the first half of Team Maine’s opening game of the tournament that interest quickly expanded.  It wasn’t long before McAllian was being followed around Orlando by a good number of division I coaches.

Very shortly afterward those coaches were treated to another display of McAllian’s talent as he scored 18 points in the second half of his team’s victory over a North Carolina based squad, including a game winning three-pointer.

By the time the national championships had come to an end he had racked up scholarship offers from a variety of division II schools and was hearing from Maine, New Hampshire, and Central Connecticut on a consistent basis.

But less than a week after returning home, McAllian was already on the University of Maine’s campus for an unofficial visit.  During that visit he offered Head Coach Ted Woodward a verbal commitment.

“I liked the fact that it was close to home,” McAllian said.  “Plus I already know a lot of the guys and really like the coaching staff.”

McAllian’s addition to that group is likely to be a significant one.  Despite the fact that he was flying a little under the radar heading into this summer, his potential is easy to see.  At 6’5 he has tremendous size for the shooting guard position that allows him to get his shot off with relative ease.  Additionally he is an outstanding three-point shooter with deep range who has also developed a very impressive mid-range game to keep opposing defenders honest.