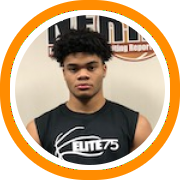 His decision came after taking a pair of official visits, the last of which to CCSU, within the last week.

Wilson graduated from Archbishop Stepinac High School in White Plains last June as a young senior and then opted for a post-graduate season.

He picked up his first division I offer last July in Las Vegas while running with The Firm and had a steady dose of division I coaches traveling to Lakeville this fall and winter.

Known primarily for his strong body and vertical athleticism through his high school career, Wilson's skill set has improved significantly in the last twelve months as he's now capable of making open threes with room and rhythm as well as putting the ball on the floor in straight lines.

"Xavier has a high ceiling," Hotchkiss head coach Yassine Talhaoui told NERR. "He's won everywhere he gone and that's not a coincidence. He's an amazing locker-room kid who has a relentless work-ethic."

He was one of the leaders of a Hotchkiss team that advanced to the semifinals of the NEPSAC Class A tournament and was chosen for the All-New England team following the season after averaging 14 points, nearly 9 rebounds, 2 steals, and 2 blocks per game.

Congratulations to Xavier Wilson ‘19 on committing to continue both his academic and athletic careers at Central Connecticut State! We are so proud of you X and can’t wait for what you do at the next level! Join us in congratulating Xavier on his achievement! #HereComesHotchkiss pic.twitter.com/mMNfakpERF