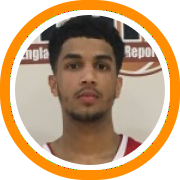 More so than in any other New England State, Connecticut has seen a rash of freshmen break out before our eyes this spring and establish themselves as bonafide prospects. Let's take at these cats and also check in with some level-raising prospects and some guys who continues to progress on par.

Nate Laszewski - Transfer to Northfield Mount Hermon and reclassification vaults Nate to the top of the conversation topic titled, 'Best Prospect in Connecticut's Class of 2018.'

Jaekwon Spencer - AFB Freedom - Lengthy small forward is an explosive athlete who elevates in a hurry and comfortably finishes and grabs boards above the rim. Good passer handles the ball in the open floor and leads a free-wheeling fast-break after busting out with a defensive rebound. Has just begun to scratch the surface of his potential. On the fast-rise heading into summer.  Video-Highlights Here

Mekhi Warren - Boston Spartans - Long-athletic small forward has some game off the bounce, a nice shooting stroke from the outside, and the ability to swoop to the basket and finish above the rim. Lots of room left to improve with a ton of potential.
Video-Highlights Here

Jake Glezen - New England Playaz - After a great start to the spring in which he launched himself onto the scene at the NERR Northeast Hoops Festival, Glezen turned an ankle and missed about a month. The big-man has been on the mend working his ankle back to full-strength and he looks to be rounding back into top-form heading into the summer. Tough competitor plays with passion and has an assortment of plus-skills on the interior.

Ben Eke - New England Playaz - Smooth off-guard with a tight skill-set scores and distributes within the offensive-flow and has nice tools on the defensive perimeter.  Video-Highlights Here

Jamil Hornesby - CT Select - Hyper-quick point guard with a tight-handle and stroke plays efficient turbo-possession basketball; breaking down the defense with a quick move to get into the lane, knocking down shots off the catch and bounce with a swift release, and speeding up the opposing ball-handler by hounding him at each and every turn.

Raheem Solomon - NY Rens - After a statement freshmen season running alongside Mustafa Heron and co. for the Sacred Heart HS Squad which won the CT Class S State Championship this winter, Solomon has continued his ascendence this spring on the Adidas Tour with the NY Rens and looks like a prospect destined to be recruited at the highest level.

Kwane Taylor - Expressions - Skilled hard-nosed point guard has seen the level of his athleticism, speed, and flexibility raise significantly over the past year and it's paid big dividends to his already crafty game from the point guard spot. Taylor has had a good spring for the Expressions Frosh; running the show effectively from the point, creating off the bounce, and knocking down shots with great-elevation from the mid and long range off both the catch and bounce.  Video-Highlights Here

Shamir Johnson - CT Select - Swooping athletic wing-guard continues to grow, lengthen-out, and add plus-elements to his ever-diversifying game. Going to be in great shape in terms of options if this trend continues, which is likely.

Jamani Eaton - AFB Freedom -  CJ McCollum Rule southpaw guard with a smooth skill-set fills it up with the best of them from long-range and can cut you up off the dribble-slash. Hasn't grown yet, but watch out as he catches pounds and inches.  Video-Highlights Here

Tamar Williams - CT Select - Not many play harder as this fearless guard who is the type of competitor who'd run through a wall to make a play. Capable of causing havoc in the defensive back-court and putting up points in a hurry from long-range and in-transition. Dangerous when locked-in.

Prospects whose development has continued on par...

Nyzair Rountree - Expressions - Since returning from injury about a month ago, Rountree has made explosive above-the-rim plays consistently while getting his timing back. Should be a big summer ahead.. Video-Highlights Here.

Rakesh Tibby - New England Playaz - High-IQ energy forward with length is as consistent as they come in the front-court; rebounding and defending with energy while running the floor and scoring the ball in a number of situations when an opportunity comes his way.

Jaykeen Foreman - Expressions - Junk-yard-dog forward provides an active-physical presence in the paint and possesses the athleticism to elevate and finish at the rim in a variety of situations. Also capable of knocking down shots from the mid-range.

Jonas Harper - Stamford Peace - Athletic open-floor guard continues to refine his skill-set and develop his back-court game. With a strong competitive-streak, Harper is going to be a nice player as he puts it all together in the back-court.

William Antrum - Expressions -  Wide-body soft-touch small forward battles on the glass at both ends while mixing power and finesse to maneuver his way towards high percentage looks at the basket both off the catch and bounce.

Isaiah Williams - Southpaw point guard spent the spring sidelined with a knee injury but expect him to bounce back quickly as he works towards returning to form.

Isaiah Gaiter - Haven't gotten the chance to see IG this spring, but assuming he is putting in work and working toward developing towards his potential. Gaiter has a lot of ability and can impact the game in a wide-variety of ways.

In addition to the guys above, a few other guys who caught our eye this spring are AFB Freedom Guards Melvin DeLeon and Jahlil Mann, an on-the-rise pair looking to continue to ascend this summer.