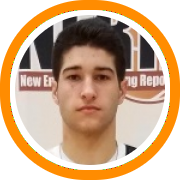 Over the next week, we'll be taking a look at which freshman throughout New England are making a varsity impact through the early portion of the season.

A pair of freshmen who have taken Southeastern, Mass by storm out of the gate this season are AAU teammates Brycen Goodine of Bishop Stang HS and Noah Fernandes of Old Rochester HS. Goodine is a 5-tool hybrid who plays all over the floor and has been averaging right around 18 points a game for a Spartans squad which has galloped out to a 4-1 record. Meanwhile, according to Plymouth Sentinel Sports Correspondent Rob Duca "Noah Fernandes is drawing rave reviews around the South Coast League, most recently from Wareham Coach Kevin Brogioli, who referred to the youngster as the 'real deal'." Noah has led the Bulldogs to a 5-1 start to the season, guiding his squad with poise from the point despite repeatedly facing defensive-schemes geared towards taking him out of the game. Old Rochester dropped their first game this past Saturday to Stang in a thriller in which Goodine finished with 18 point and Fernandes scored 17.

Freshman small forward Tyrone McCray has been chopping wood for Avon High School early on this season. He went for 23 points in a win against West Bridgewater and has been the Panthers' top scorer so far this season.

Bridgewater-Raynham High School is off to a 2-2 start and looking to make a run in the Old Colony League as 2015 begins to unfold. The Trojans have gotten major production early-on from the freshman back-court combination of Alex Batista and Doug Alves. Battista went for 16 points B-R's season-opening loss to Brockton HS while Alves has played with poise beyond in years and gotten into double-figures in the scoring column on multiple occasions through four contests.

After a monster fall season as a wide-receiver in which he established himself as a big-time football prospect, Preston Santos has wasted little time this winter showcasing his vast-potential on the hardwood for a Bishop Hendricken (RI) squad which is 5-2 out of the gate. The lefty swing-man has delved in double-figures on multiple occasions while displaying the ability to affect the game in a variety of ways. The level of production which the Hawks receive from Santos will only increase as the season moves along.