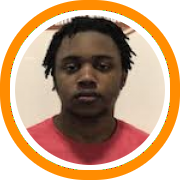 Long-athletic freshman forward Christian Adams has been a mainstay on the front-line for Hillhouse High School (New Haven) through the early part of the season and has had several big games, including an 18 point outburst in a win over Notre Dame-West Haven and a 13 point showing last night in a win at the MLK Classic over Bridgeport Central. The Presidents are 7-1 through eight games and ranked #9 in the Gametime/New Haven Register CT Top 10.

After averaging around a dozen points through the first half-dozen games for Holy Cross HS in Waterbury, super-athletic freshman wing-forward Nyzair Rountree exploded last week, bringing down the house on multiple occasions with highlight-reel plays at high-altitude while going for 26 points in a game against Crosby and then following that up by dropping 28 in a narrow defeat against Wilby HS. The Crusaders are 5-5 and on the rise. Look for Rountree to be a serious problem throughout the season's second half.

The Taft School is getting frosh production in the form of hybrid-guard Shamir Johnson, who has gotten into double figures scoring the ball on multiple occasions while consistently making an impact in a variety of ways on both sides of the ball. The Rhinos have a veteran squad which is 6-4 out of the gate. They have a chance to put together a terrific second half.

Long-athletic freshman forward Raheem Solomon is a major part of an undefeated & #1-ranked Sacred Heart High School team featuring the #25-ranked player in ESPN's Class of 2016 Rankings, Mustapha Heron, and also a formidable pair of bigs in Malik Petteway and Tyrn Flowers. The Hearts moved to 8-0 this weekend with a huge-win over Christ the King (NY) at the Hoophall Classic and look poised to take a serious-shot at running the table. Would love to see a showdown between Sacred Heart and Putnam (MA).

Southpaw freshman point guard Isaiah Williamshas been impressive contributing in the back-court at East Hartford High School. In his first vsrsity start, Williams went for 12 pts 5 steals 1 turnover in a 63-60, win over Hope HS of Rhode Island. The Hornets are 6-3 and dangerous heading into the season's second half.

Freshman point forward Isaiah Gaiter is a big part of the 6-3 start which Xavier HS has sprinted out to. The versatility which Gaiter brings to the table gives the Falcons more of the same as a squad heading into the second-half of the season.

Rangey inside-outside freshman forward Rakesh Tibby has been steady as a starter in the front-court for Capitol Prep High School. Capitol is 6-4 on the season and pulled off a big win over East Catholic most-recently.

Skilled freshman forward John Kelly is providing steady front-court production for a Fairfield Prep squad which is 8-0 out of the gate and ranked #4 in the Gametime/New Haven Register CT Top 10. The Jesuits have not lost a regular season game in more than two years.

Hard-nosed freshman point guard Kwane Taylor has been a focal part of the back-court for Wilbur Cross HS thus far this season. The Governors have started the season with a record of 6-4. Additional freshmen on the roster include William Antrum and Jaykeen Foreman.

Middletown High School is getting strong back-court play from freshman scoring guard DeAaron Lawrence, who has gotten into double figures multiple time and popped for a clutch-10 off the bench for the Knights in an upset win over Tascarora on Friday night which evened their record at 6-6.

Athletic-playmaking freshman guard Jonas Harper has been making a ton of noise for St Luke's in it's four-guard attack, averaging right-around double-figures while making plays all over the floor on both sides of the ball. The Storm are 8-3 on the season and on the rise.

Guilford HS has received production from freshman forward Noah Rubino, who has steadily made an impact scoring the ball and on the glass for the Indians in the front-court.