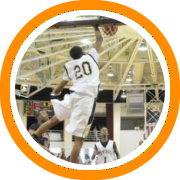 Saturday’s action featured some of the top individual players in the entire country as the nation’s top ranked senior Jared Sullinger and second ranked junior Austin Rivers headlined a loaded roster of talent.

Today’s action also had a distinct local flair as top teams from Western Massachusetts and Connecticut were in action.

After the first quarter it looked as if Central might be in for a long night as Columbia was utilizing their size advantage up front to establish a double digit lead.  But Central would ramp up their defensive effort and utilize a half-court trap to force turnovers that led to easy scoring opportunities in transition and consequently turn the tide.

Jordan Smith and Jaylen Brantley both scored 19 points to lead the victors.  Brantley got going with his three-ball in the first half and then made some plays in the open floor by slicing to the hoop and finishing with body control.  Smith was the team’s anchor in their half court offense, coming off screens to bury threes, creating space in the mid-range area with his step back jumper, and being opportunistic getting to the rim.  Victor Aytche and Cornelius Tyson came off the bench to spark Central’s second quarter run as Aytche made a series of athletic finishes and Tyson showed terrific floor vision, passing ability, and court awareness for a freshman point guard.

One of the CIAC’s top teams took on a powerhouse from New York as Sacred Heart met up with Half Hollow Hills West and their star player Tobias Harris.  The Tennessee bound forward showed why he is one of the nation’s top ranked players in the class of 2010 as he made a series of explosive plays athletically, demonstrated range out to the three-point line, and was a monster on the glass, finishing with 35 points, 16 boards, and 3 blocks.

Cory Andrews and Josh Turner were the story for Sacred Heart as the duo scored 52 of the teams 56 points.  Andrews earned the team’s Most Outstanding Player award after finishing with 27 points and 12 rebounds.  The senior forward made a variety of athletic plays around the rim while also demonstrating a capable scoring touch in the mid-range area.  Turner, who finished with 25, also played very well, using his length and smooth skill set to score the ball in a variety of ways.

New Britain came into Springfield to take on hometown favorites Sci-Tech and came away with a hard fought victory.  Darius Watson was the story for the Hurricanes as he finished with 28 points & 12 rebounds, showing his versatile inside-out skill set.  Steven Glowiak, who had been on an absolute tear coming into the game, had a hard time getting anything going as he went 0-9 from three-point land and finished with 10 points.  Sci-Tech was led by Theo Robinson who did his best to answer Watson with 22 and 11 of his own.

Out of Region Scoreboard

Winter Park High School (FL) 73  Gonzaga College High School (DC) 69
After putting on a show for three quarters, Austin Rivers left with a sprained ankle early in the fourth but Winter Park was still able to hang on.