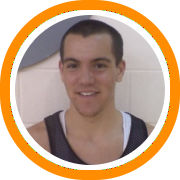 The Hoophall Classic tipped off Friday afternoon at Springfield College’s Blake Arena.  The first three games of the day featured top high school girls programs from the greater Western Massachusetts area.  The nightcap featured similar match-ups on the boy’s side.

Sabis was able to open up a double digit first half lead after Hoosac senior forward Robbie Burke was forced to head to the bench early in the second quarter with foul trouble.  With the big man out of the line-up, Sabis pounded their opponent on the glass and got going in transition.

Andre King was the story of the first half as he got a couple of easy buckets early and then began to catch fire with his jumper.  By the time the teams headed in for halftime the powerful guard had done a little bit of everything: stroking shots from the perimeter; taking balls off the defensive glass and leading the break; scoring with his dribble penetration; and even making a couple of heady passes.

King handed the reigns off to Kamali Bey in the second half, who took the game over for minutes at a time in the third quarter.  Like King, Bey scored inside and out, posting smaller guards, converting a series of tough mid-range runners, and even getting into the groove with his jumper.

Robbie Burke tried to get going in the second, scoring 15 points after intermission either by finishing around the basket or attacking with his dribble, but ultimately Sabis was able to pull away for the victory.

Burke earned MOP honors for Hoosac, finishing with 15 points.  The only other notable bright spot for Hoosac was point guard Nick Aitken who made a variety of nice passes, demonstrated a heady feel for the game, and scored 14 points including two three-pointers.

Dan Martin set the tone early and then teamed with Ryan Rickiewicz to help East Longmeadow to a win over rival Northampton.

Martin finished with 26 points on 9-16 shooting from the floor and 7-8 from the stripe while also contributing 9 rebounds, including 4 on the offensive end.  While the numbers paint a descriptive picture, the best word to describe Martin’s performance is efficient.  He got to the rim and finished with great footwork, showed a quick release on his perimeter jumper, was quick to back-cut when overplayed, and showed great wheels sprinting the floor in transition.  His performance earned him the game’s MVP award.

Mickiewicz didn’t have the same level of productivity for all 32 minutes but he came up huge down the stretch of the game.  After East Longmeadow had led by double figures for the majority of the second half, Northampton began to make their run late, but Mickiewicz would slam the door, first with a dagger three-pointer from the left wing that looked like an ill advised shot until it swished through the net and then with a strong drive and scoop shot that kissed off the glass.

For Northampton, Jake Laga impressed us the most.  He was relentless attacking the rim and the glass, made a variety of hustle plays, knocked down 2 of his 3 looks from behind the arc, and 7 of his 9 free-throws.  But it was Jesse Coulon who earned his team’s MOP award with 17 points, many of which came during their second half run.  Ellis Cooper struggled with foul trouble for much of the game and was rarely able to catch the ball in his sweet spots offensively but still managed to finish with 10 points, 8 rebounds, 4 assists, and 5 steals.

Senior big man Devin Abad showed some tools in the second half for East Longmeadow while junior swingman Brandon Bosworth also stood out as someone with some intriguing potential.