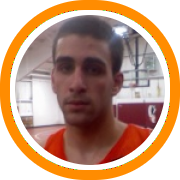 The talent pool at Super Week 2 was so deep that the all-star game roster could not be narrowed down to just twenty kids. Thus, they decided to play two separate all-star games so everyone who shined at camp could be properly honored. Here is a list of all the all-stars:

One all-star game featured an electrifying dunk show by Elvis Gale and Luke Apfeld. Each of them threw down multiple thunderous finishes. The best of the night may have been an alley-oop thrown to Gale from halfcourt, which he caught and deposited with his head above rim level. Also playing well in this particular game were Alex Berthiaume, who thrived in the open court affair, and Tyler Olander, who got to the rim with ease.

The other all-star game was highlighted by the play of Greg Jacques and Joe Bozzuto. Jacques played his game as he knocked down shots and got into the lane for some nice tear drops.  Bozzuto made a name for himself in this game with some tough drives and finishes.

The Raptors, a team appropriately named since they were comprised of players from Canada, ended up winning the team championship.  They were led by Hernst LaRoche and Khem Birch, a terrific prospect in the class of 2012.

Gerard Coleman was selected as the camp’s Most Outstanding Player.  This appeared to be a no-brainer as the future Tilton swingman was scoring at will all week long.  His best game came on Wednesday as he almost single handedly led his team over a team comprised of players from the Expressions AAU team.  Coleman simply couldn’t be stopped as he scored with his smooth dribble drives, a series of runners in the mid-range area, and an improved three-point stroke.