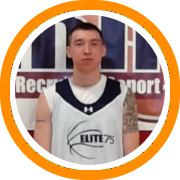 Hoop Mountain Super Week 1 got kicked off at Stonehill College on Thursday with its first full day of action. With three game sets, players had a tremendous opportunity to be seen by a wide array of Division 2 and 3 college coaches.

Jake Fay, Brimmer and May- Fay got the day off to a good start when he banged 4 three’s in the first quarter of his morning game. When defenses crowded the 6’5 shooter, Fay showed an ability to put the ball on the floor and get to the rim where he showed off his bounce. Fay, a 2013 kid, is an intriguing division one prospect.

Carlin Haymon, Rivers School: A pint-sized point guard with enough speed to make a Ferrari jealous, Haymon is the quintessential point guard. Haymon, an absolute terror with the ball, drove defenses nuts the entire day as opposing point guards were unable to keep him out of the paint. With an ability to both use and reject ball screens, Haymon is the ideal pick-and-roll point guard.

C.J. Moss, Taft School- Moss has demonstrated a vastly improved jump shot in recent weeks, and the trend continued today. A lead guard with a solid frame, Moss shook defenders off the dribble before pulling up and knocking down shots. This summer will be huge for Moss and his scholarship aspirations, and so far it is off to a good start.

Shaquor Sandiford, Rivers School- Sandiford has a great a presence about him on the floor. He is always under control, displays great leadership qualities, and is a silky smooth athlete. Shaq’s unselfishness really stood out; he is always looking to make plays for others, and at times, is too unselfish. In his morning game, Sandiford got to the hoop with regularity, both finishing and getting others involved.

Oliver Nazon, Brimmer and May- A lanky athlete, Nazon showcased a solid inside-out repertoire in his night session game. Nazon’s length allows him to get shots off over contesting defenders. He was able to knock down some shots both from deep and mid-range, as well as do good work on the offensive glass.

Kevin Trotman, Taft School: A 6’4 athlete from the 2012 class, Troutman has one superior skill: he plays hard, EXTREMELY hard. Trotman does small things (take charges, make the extra pass) that can only be termed as “winning plays.”

Connor Merrill, Vermont Academy: A 6’5 shooter headed for a PG year at Vermont Academy, Merrill has a horde of D3 coaches dreaming about getting this face-up 4 man on campus.

Connor McComber, St. John’s Prep- McComber is a heady combo guard who has been mostly playing the wing at camp, but plays point guard on his high school team. He runs, slashes, and gets to the hoop consistently.

Khyan Rayner, Bishop Hendricken: Rayner, a rising sophomore at Bishop Hendricken, was a lock to capture MVP honors in the NBA Western division until he got the afternoon call-up to the camp’s older division. The lanky point guard did more than hold his own against the older competition as his shot-making ability translated well to the higher level of play.

Justin Turner, Brimmer and May: Turner, a stocky point guard headed to Brimmer and May next year, knows how to use his body to ward off defenders and create space to get into the lane and free himself for his jumper. When defenders elected to go underneath ball screens, Turner made them pay on multiple occasions by knocking down threes.

Charles Gunter, New Mission: A good athlete with a chiseled body, Gunter stepped outside in the afternoon session to knock down a couple of three’s

Wil Michalski, Shrewsbury High- 6’5 and tough, Michalski will be a solid 4 man at the Division 3 level. He showed good footwork in his post game, as he completed plays on the block. He utilized the up and under move very effectively several times, either scoring or getting fouled.

D.J. Hayes, Windsor Locks- Just a solid, tough all-around guard, Hayes made a number of shots in his afternoon game.

Harry Glor, Belmont Hill: A product of the Boston Warriors AAU team, Glor not only hits shots, but also plays a physical, tough brand of basketball that is conducive to winning basketball.

Brent Palella, Pomperaug- The 5’9 point guard is a Division 1 baseball prospect but could certainly help a Division 3 basketball team. He is quick, tough, and a good decision maker.

Avi Adler-Cohen, Newton North- Adler-Cohen is a physically strong point guard who makes the easy play, which is an important trait for a floor general. Whether it is making the extra pass, staying in front of his man defensively, or hitting open shots, Adler-Cohen is highly reliable.

Scott O’Brien, New Canaan- Clever with the ball, O’Brien weaves through traffic and makes plays in the lane. He ran his team very effectively when we watched him play.