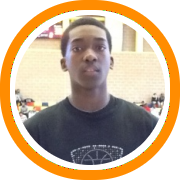 Several of New England’s regulars impressed Saturday morning at Hoop Mountain Super Week I, many of them just taking over games with their superior athleticism and skillset. Once again with dozens of local college coaches in attendance, here are a few guys who played hard and stood out this morning.

Play of the Day

Terance Mann, 2015 (Tilton) – Mann has gotten a lot stronger the past few months, and his overall game has of course greatly benefited because of it. He’s been working hard defensively and on the glass, using his long arms to sneak in for rebounds. He has also done some of the ball handling for his team, and his stood out by creating for others as well.

Max Risch, 2013 (Williston-Northampton) – Risch plays hard at all times and has been taking anybody in camp in his way to the rim off the dribble. He has a tough mid-range jumper, and overall has one of the most complete skillsets of anybody in the field at Hoop Mountain.

Colin Richey, 2014 (Choate) and Bobby Ahearn, 2014 (Marianapolis) continued their phenomenal play today, once again showing great court chemistry. Richey has been a tough target for opposing teams because he is quicker, more athletic, and a better finisher than pretty much any other point guard at camp. Ahearn has been impossible to keep off the offensive glass, he also scores in a variety of ways and has nice footwork in the post.

John Geary, 2014 (St. Andrew’s) – A high intensity play with a nice jumper who has really done a job in making a name for himself at Hoop Mountain. As with most any player, his strength and athleticism has to improve, and as he does that, he’ll be an even more effective player.

Jamal Harris, 2013 (Blue Hills Regional – Harris is a combo guard with a solid skillset, but his scoring is a bit underrated. He has consistently been a presence on the dribble drive, and often has no problem finishing on his way to the rim through contact.

Brendan Hill, 2015 (Mansfield, MA) – Hill’s hard work down low stood out in the opening day, but even since then he has picked up that intensity and made his teammates around him better. Something that went previously unnoticed, he’s a really good passer out of the post, and he has a lot of confidence in his jumpshot.

Aayngston Bibens, 2013 (Mount Anthony Union, VT) – Bibens is a solid combo guard with a quick first step and a defensive wit that drives other players crazy. He’s an underrated finisher and a nice athlete, so as he develops a jumpshot he will be able to make himself into a more well-known college prospect.

Drew Zlogar, 2013 (Shenededhowa, NY) – Zlogar is a long and athletic player who protects around the rim with his length. He is also able to get to the rim with either hand and runs the floor well in transition.

Will Harriss, 2015 (Buckingham, Browne, and Nichols) – 6’3 and very athletic, Harris thrives because of his offensive intensity. He never lets up on his defender, a true attacker, and has a quick trigger on his strong three-point jumpshot.