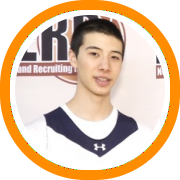 As the third and final week of the July live period gets underway it is time to take one final look back on the second week of the period.  The Hoop Group held two of their major summer grassroots tournaments last week and while the events may have been located just outside of Philadelphia, it was the New England region that stole the show.  Here’s a rundown of who helped themselves the most.

Jalen Adams, Mass Rivals – His offensive talents were on full display for the entire five day period.  His game may be unorthodox but he just has a knack for putting the ball in the basket, and the faster the tempo, the more lethal he is.  On a team that includes six other players with high-major offers, he was their best scorer.

Alec Brennan, Expressions Elite – When Jared Terrell went down with his injury, Expressions needed their big men to step up.  Brennan did just that, being assertive in the paint while showing his face-up skills and reportedly landing new offers from Seton Hall, Delaware, Providence, Temple & St. Bonaventure.

Paschal Chukwu, CBC Donnelly – The big fella was showing signs late last month at the Elite 75 and has continued to bring his game to new levels with each passing weekend this month.  He was a dominant defensive presence while showing a variety of offensive tools and potential en route to landing what should be the first in a long line of high-major offers.

Aaron Falzon, ECE Mass – Falzon was very good to start the week at the Summer Classic and even better on Sunday when he led his squad to their second championship of the five day period.  His inside out skills and overall scoring prowess stood out from start to finish, especially considering that the rising sophomore was playing up at the u16 level.

Abdul-Malik Abu, Expressions Elite – You can’t call what he did a “breakout” when he already held so many high-major offers but Abu was tremendously impressive this weekend because he played an inside-out style that played to his physical dominance.

Jason Boswell, New Rens Hargraves – This was our first look at him in a New Rens uniform and he seemed to fit in well.  His physical tools are obvious assets, especially in an AAU style setting, as his perimeter skills continue to evolve.

Willem Brandwijk, Rhode Island Hawks – The Hawks u16 made their latest deep run, ultimately winning the silver bracket.  Brandwjik was one of the top standouts as he showed college coaches why he’s a prospect to watch closely in the class of 2014.

Cane Broome, ECE Mass – He was probably the most consistent offensive threat ECE Mass had on their u17 team after Jarred Reuter went down with an injury, shooting it well from long range and utilizing his trademark slippery drives.

Sam Donahue, Rhode Island Hawks – There simply aren’t a lot of guys who can shoot the ball as well as well as he can and college coaches are starting to realize that more and more.  He has one division II offer to his name but increasing division I interest.

Dimitri Floras, Mass Rivals – He has the ability to rise to the occasion in the big moments and he showed it on a couple of different games this weekend.  He stepped up big for the Rivals on Wednesday night and then drilled a game winning three-pointer to beat the Westchester Hawks 45-44 on Saturday.

Goodluck Okonoboh, Mass Rivals –While he and his new teammates still have to develop continuity on the offensive end, his impact was immediately noticeable on the defensive end, where the unofficial tally credited him for 17 blocks over a two day period on Saturday.

Elijah Rogers, Expressions – The program had two teams show well last weekend as Expressions Red made a nice run in the u16 bracket as well.  Rogers was the team’s offensive facilitator showing his ability to create offense and put points on the board.

Jeff Spellman, ECE Mass – Spellman scored a recent scholarship offer from Boston University and also caught the eye of coaches from Gonzaga last week in Indianapolis. The athletic, shot-making guard continued to put points on the board this week, helping his squad to a pair of titles.

Kurt Steidl, CBC Donnelly – Three things that Steidl did consistently well all week long that attracted coaches’ attention: First, he played extremely hard; Second, he continued to make shots from the three-point line; Third, he flat out scored the basketball.

Jared Wilson-Frame, CBC Smith – He was the bright spot for his CBC team as he had the coaches’ section buzzing early in the week, not just with his scoring, but also with his rebounding, and continued to show well throughout the Summer Jam Fest.

Danny Upchurch, Westchester Hawks – The Notre Dame Fairfield point guard’s stock has been a linear path all spring and summer long as he consistently improves his stock by proving his worth against a high level of competition.

• Henry Bolton got hot with his jumper over the weekend, stepping up with Jackson Donahue out of the line-up with an ankle injury.

• Christian Ejigba is a guy who appears to be much improved since we first saw him early this AAU season as he runs next to Boswell with New Rens Hargrave.

• Malik James had a bit of a breakout weekend for ECE Mass, showing speed with the ball and playmaking ability down the stretch of the weekend.

• Sem Kroon’s reclassification to NMH has pushed him to Westchester Hawks’ u16 team and that’s a level where he’s physically able to dominate.

• Mike Leblanc came up big for the Rivals early in the week, especially when he stepped up Wednesday night to lead them to an overtime win.

• Jeremy Miller’s flashes of stardom are starting to appear more frequently for the Rivals as he impacts a u17 game with his shooting and athleticism.

• Toriola Moses made debut his debut for Expressions Elite this week and while he’s obviously still raw there is a lot to like about this youngster’s upside.

• Jeff Racy seemed to be on fire with his jumper all week long for CBC Donnelly while Casey Woodring delivered 18 & 19 point games over the weekend as well.

• Jarred Reuter missed the last few days with injury but was on top of his game when in the line-up showing his physical dominance and passing ability.

• Thomas Rivard held his own in the paint this week for the Hawks, battling bigger people on the defensive end and showing inside-out tools offensively.

• Alijiah Robinson was clutch down the stretch for Expressions Red, knocking down two big free-throws to seal a win over Jersey Shore Warriors 16’s.

• Damion Smith impresses because he impacts the game on both ends of the floor while also making his presence felt on the glass.

Jared Terrell put on a dunking exhibition before going down with an ankle injury against the Jersey Shore Warriors. Video highlights were captured by Lucas Shapiro:

Check out Dimitri Floras buzzer beating three-pointer to list the Rivals over the Westchester Hawks.  Video highlights were captured by Lucas Shapiro: