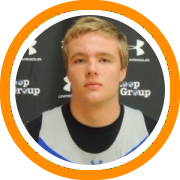 The Hoop Group came to New England this week for their annual stop on their Fall Top 100 Tour.  They began on Saturday at the Reggie Lewis Center for their New England top 100 and then moved south to Connecticut on Sunday for the Academic Elite 100 at Trinity College.  Here’s a look at who impressed:

Alex Wolf, Greenwich (CT) – The big fella showed why he could very well be the newcomer of the year in the CIAC this season.  He’s big, powerful, and in this setting there was simply no one to contend with him inside the paint.

Travis Berry, Kent (CT) – As physically imposing a lead guard as you’ll find, Berry has tremendous size and length for the position along with the athletic upside to be a very intriguing prospect for the next level.

Kris Hargraves, Westminster (CT) – Southpaw point guard showed poise and decision making by distributing the ball and setting the table for others while picking his spots to show his trademark slashing ability.

Ryan Yearwood, Trinity Pawling (NY) – A long and athletic six-foot-six forward with the corresponding motor to compliment his physical gifts, Yearwood had his fingerprints all over the game around the rim.

Danny Upchurch, Notre Dame Fairfield (CT) – Coming off a big summer in which he proved he could run the show at a high level, Upchurch utilized the showcase setting to display his individual skills to create his own offense.

Travis Descoteaux, Marianapolis Prep (CT) – Efficient is the best word to describe his performance, beginning early on in drill work and continuing throughout the course of five-on-five action.

Liam Bruno, Newton North (MA) – Only a week after standing out at the Hoop Mountain Fall Classic, Bruno continued to impress here with his toughness and hard-nosed approach to the game.

Tyonne Malone, Williston Northampton (MA) – The freshman swingman was arguably the top long-term prospect in the event and he put his tools and talent to work by attacking the rim and getting buckets from start to finish.

Devin Stallings, Crosby (CT) – The breakout performer of the day turned heads by attacking hard off the bounce and looking to dunk everything around the rim.  If he can carry it forward he could be one of the most improved players in the NVL.

Jordan Smart, Westminster (CT) – He’s got the physical tools to translate his game beyond the high school level and is just starting to put all the pieces together.  He’ll compliment Hargraves well in the Westminster backcourt.

Steve Edmonds, Marianapolis (CT) – He’s got the ball on a string and capable of breaking his defender down off the dribble, but is equally capable of raining threes from long range with a smooth stroke.