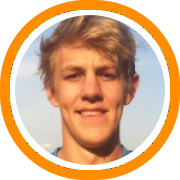 Northfield Mount Hermon post-graduate forward Josh Hearlihy brought his recruitment to an end on Friday afternoon with a commitment to Tulane.

Hearlihy was one of the best remaining prospects left on the board.  He had taken official visits to George Washington and Santa Clara, as well as Tulane, since the end of the prep school season, and had an upcoming trip scheduled to Davidson.

“Tulane had every aspect of what I was looking for,” Hearlihy told the New England Recruiting Report.  “First the academics, obviously that’s a big thing coming from Harvard Westlake and Northfield Mount Hermon.  They have a great business program and that’s what I’m looking to study, and just the opportunity, I think I can help to start something special there.”

“The coaching, the city itself, and the players,” Hearlihy said, “every aspect that I was kind of checking off my checklist, they kind of matched perfectly.”

The six-foot-seven southpaw forward had a big season for Northfield Mount Hermon, averaging 11 points, 6 rebounds, and 3 assists while helping the team to a 29-5 record and their first ever National Prep Championship.