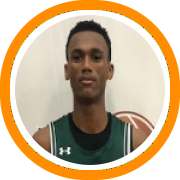 After having regional locations in four different host cities in the first weekend of the April recruiting period, the Adidas Gauntlet concluded outside of Atlanta this past weekend with all of their sponsored programs in attendance including the Mass Rivals and Team New England.

The Rivals finished the regular season with an overall record of 5-4 putting them in good shape for this year's Adidas Gauntlet Finale, which will be held on the first weekend of July's recruiting period in New York City. The Rivals went 2-3 this weekend with wins over a very talented Exum Elite squad from Utah as well as Team Lillard. They dropped a close match-up with Pump N Run on Friday night and also fell to two of the better teams in the Gauntlet, D1 Minnesota and ITPS Wildcats, later in the weekend.

Balance has been the theme for the Rivals over the course of the last two weeks as various players have stepped up at different points. Dallion Johnson went 5-6 from behind the arc to score a team high 15 points on Friday night while Taelon Martin dropped 20 points on D1 Minnesota on 8-10 shooting from the floor, including a number of pretty finishes and a pair of threes. Five different players were in double figures in the win over Exum Elite as Johnson scored 16 while Demarr Langford had 15 along with 7 rebounds and 4 assists. Wildens Leveque, Tanahj Pettway, and Martin were also in double figures. It was Tyler Burton who led the team in scoring in both of Sunday's games as he missed only 4 shots on the day. Jordan Minor also chipped in with 6 points and 6 rebounds off the bench in the win over Team Lillard.

While Team New England's overall record is certainly not what they would have hoped for at this point, the team has shown steady growth throughout the course of the month. They opened session two with a near impossible match-up against a Compton Magic team that featured high-major prospects at every position on the floor and fell to Derrick Favors' Atlanta Celtics team on Saturday morning. Despite the losses though, Moses Flowers still managed to impress coaches in attendance, not just with his athleticicm and frame, but also with his expanded skill set as he scored 18 points while making all three of his three-pointers against Compton Magic and went for 23 points, on 7-11 shooting from the floor and 5-8 from behind the arc, against Favors. Levar Williams made four threes of his own in that one to add 14 points while Tyson Walker had 12 points and 6 assists.

Team New England rallied to win two of their last three games. Kadary Richmond, an intriguing talent from South Shore High School in New York, went for 15 points and 7 rebounds in a win over the Las Vegas Knicks while Walker had 14 points and 6 assists and Flowers added 12 points, 4 rebounds, and 4 assists. Their defense also limited the Knicks to just 40% shooting from the floor. Cameron Shockley-Okeke came alive on Sunday, first going for 15 points and 9 rebounds in a hard fought loss to Team Stackhouse but then exploding for 34 points and 9 rebounds against Team Zach Lavine in a game in which he shot 14-17 from the floor and 4-4 from behind the arc.