Freshman of the Year! 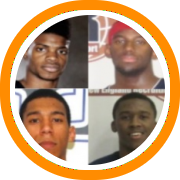 The 2012-2013 prep school season may have officially come to an end last week, but Tuesday was still a tremendous day for NEPSAC basketball.

Incredibly, all four leagues awarded their Rookie of the Year to a product of the NEPSAC.

Brewster Academy graduate Jakarr Sampson took those honors in the Big East.  The six-foot-seven forward was named Big East Rookie of the Week on seven different occasions and led all rookies with nearly 15 points and 7 rebounds per game for St. John’s.

Sampson starred at Brewster Academy in each of the last two seasons, earning NEPSAC Class AAA Player of the Year honors last season while also picking up MVP honors at the National Prep Championship, where he led Brewster to their second national title.  Sampson is the second consecutive St. John’s and NEPSAC product to be named the Big East Rookie of the Year following South Kent’s Moe Harkless a year ago.

In the ACC, Boston College’s Olivier Hanlan was named the conference’s Freshman of the Year.  Hanlan is an alum of the New Hampton school after spending two years there.  He averaged 14.6 points, 4.2 rebounds, and 2.3 assists this season for B.C.  He also scored in double figures in 26 games, which was tops among all freshman in the ACC.

Hanlan was followed in the voting Duke’s Rasheed Sulaimon and N.C. State’s T.J. Warren, who also starred for Brewster Academy last season.  Hanlan is the first player in B.C. history to be named ACC Freshman of the Year.

Despite missing the final seven games of his freshman season, Kentucky freshman and former Tilton star Nerlens Noel walked away with a wealth of hardware on Tuesday.  He was named the SEC’s Freshman of the Year, Defensive Player of the Year, and also First Team All-SEC.

Noel averaged nearly 11 points and 10 rebounds per game while also blocking 4.5 shots and coming up with over 2 steals per contest.  The Everett, Massachusetts native is the fourth consecutive Kentucky product to be named SEC Freshman of the Year joining DeMarcus Cousins, Terrence Jones, and Anthony Davis.

Semaj Christon was another member of Brewster Academy’s national championship team from a season ago.  Now the Xavier freshman point guard is the first player in school history to be named Atlantic 10 Freshman of the Year.

Christon averaged 15.4 points and 4.7 assists per game to lead en route to his award, while also being named to second team all-conference in the Atlantic 10.