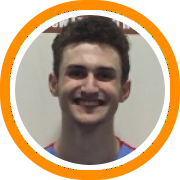 Expressions Elite's u16 squad made the trip to Atlanta this weekend for the Nike Challenge.

The Nike Challenge is one of four tournaments run alongside each regular season session of the EYBL. All Nike sponsored programs are permitted to attend any of the four tournaments, with a cumulative point system determing which u16 and u15 teams will move on to play at the Nike Peach Jam.

Ironically, they opened on Friday night with a 70-65 loss to Spiece Indy Heat but wouldn't drop another game for the rest of the weekend and scored wins over Elfrid Payton Elite (71-47) and Alabama Fusion (64-61) to advance to Saturday night's quarterfinal round against Team United.

In a game that would literally close down the LakePoint Champions Center after wrapping up after 11pm, Expressions would hold on to knock off Team United 77-73 in overtime. Joe Pridgen was a standout performer in this one with 10 points, 7 rebounds, and 5 blocks. While he may be an undersized big man, Pridgen is long, powerful, and very athletic, as he showed off with a series of big dunks inside the lane. Preston Santos was equally impressive with 13 points and 5 rebounds.

10 hours later, Expressions was back on the court for Saturday morning's semi-final against Boo Williams. This one went all the way down to the wire before Santos made consecutive plays, first knocking down a three-pointer and then coming up with a huge block on the defensive end to secure a 66-63 win. Dyondre Dominguez led the way with 16 points and 10 rebounds while Rivaldo Soares and Daman Tate chipped in with 12 and 10 respectively.

The championship game came against AOT Running Rebels from Georgia, who were led by Isaac Okoro, a nationally ranked 6-foot-4 wing who has already been part of the USA Basketball program. Soares took on the challenge of defending Okoro and not only held him in check but also stuffed the stat sheet himself with 14 points, 5 rebounds, and 4 blocks. Dominguez and Tate both scored a team high 16 points. Dominguez added 7 rebounds and Tate 5 rebounds and 4 assists.

The return of Tate, who missed the first month of the season with an ankle injury, was pivotal for Expressions throughout the weekend. He didn't have his full explosiveness back yet but was still able to facilitate and make plays off the bounce. The second unit of Aireus Raspberry, Jalen Samuels, Connor Raines, and Christian Beck all contributed in various spots as well. Raspberry was able to maintain tempo and run the offense when stepping in for Tate while Samuels stood out with his I.Q. and defensive impact. Raines provided versatility and Beck contributed 8 points with his shot-making in the quarterfinals.