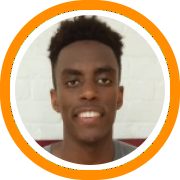 Phillips Exeter Academy post-graduate Christian Lutete made a verbal commitment to Radford on Wednesday night, ending his recruitment in time for next week's early signing period.

The six-foot-three two-guard is a Maryland native who previously starred at McKinley Tech in Washington D.C., where he graduated last June.

Lutete ran with Mid-Atlantic Select on the AAU circuit and was one of the biggest breakout performers in the northeast region last summer, earning scholarship offers from a variety of different division I programs.

A southpaw shot-maker and one of the best available three-point shooters left on the board, he has a specific niche that makes him particularly attractive to college coaches, but has simultaneously continued to develop his versatility on the offensive end of the floor.

Prior to heading to the Big South, Lutete should be one of the top players in Class A of the NEPSAC as he helps Exeter in their efforts to defend consecutive Class A championships.

Below are some highlights of Lutete prior to his arrival in New England: