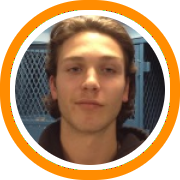 East Catholic senior guard Mark Carbone made a verbal commitment to the University of San Diego on Monday night, announcing his commitment via his twitter account.

I'm proud to announce that I have verbally committed to play basketball at the University of San Diego ! #Toreros pic.twitter.com/rYKNspf4mg

The sharp-shooting guard has improved by leaps and bounds within the last year. He's a self-made player who is known for his toughness and ability to knock down open shots from behind the arc but he's also worked hard to develop his body.

Carbone's recruitment got going during his junior season when he landed his first offer from the University of Hartford. Former Hawks' assistant coach Chris Gerlufsen made the move across country last spring, joining the new staff at USD, and soon enough Carbone had a chance to follow.

His commitment is in the class of 2017, meaning he'll do a post-grad year next year at a school still to be determined before heading to San Diego for the following fall.

Carbone is coming off a big summer with the Connecticut Basketball Club as they returned to the circuit to make a big impact in the month of July, culminating with a championship at Live in the A.C.

He won a state championship with East Catholic as a sophomore and is expected to have them among the contenders again this year.

Carbone was the second product in the Nutmeg State to pledge to San Diego on Monday as they also scored a commitment from Cheshire Academy's Jose Martinez.

Martinez is a highly skilled 6-foot-9 big man who came to the prep ranks from Long Island Lutheran in New York. He's highly skilled for his size and specializes in extending opposing defenses to the perimeter with his face-up skill set.