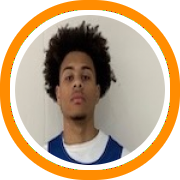 Finally, we will preview the guards in the field who impressed.  As there are every year at the Elite 75, there are breakout performances from student-athletes of whom college coaches are not familiar with when they walk in the door, and there are performances by those who have been seen more extensively, but show drastic improvements in their game.

Whether guards are asked to drive, shoot, or distribute (and often all three), most games at the college level are won on guard-play.  Coaches will always have their eye out for those who can help in the backcourt, and the following showed that they can lift a college program if they keep working & keep improving.

Jordan Riley (Windsor HS, 2019)- Fresh off a visit to Bryant, Riley stole the show on Thursday night.  An explosive lead guard with a very quick first step, Riley has an all-around game that can take over any game he is in.  Combine his ability to make shots off the bounce or catch, finish in traffic, and elevate to rebound with his explosiveness, Riley was one of the best prospects in attendance.

Dante Bouchard (Gloversville HS, 2020)- Coming from upstate NY, Bouchard came on really strong toward the end of the night.  The 6'0 guard has a compact shooting stroke that he gets off quickly, and proceeded to drill three straight 3-pointers to start the last game set, including one pull-up from six feet beyond the arc.  Bouchard is a good passer who values shot selection and not turning the ball over.

Zeke Blauner (St. Thomas More, 2020)- The New York native moves well laterally and has quick hands.  His outside jumper has improved to the point where he can use it as a weapon now, something he will definitely need as he embarks on a post-graduate year at St. Thomas More.

Bryson Andrews (Bridgton Academy, 2020)- A scoring guard, Andrews emerged as one of the better shooters in the field.  His footwork is excellent.  He has a high release on his shot.  He shoots it well from beyond the arc and inside the arc pulling up.

Jordan King (Christian Brothers Academy, 2019)- The unsigned senior guard from Albany is a do-it-all guard who can score from all three levels.  One of the steadier guards in the field, King is patient coming off ball screens while maintaining vision of the entire court.  His ability to take contact & finish at the rim stood out.

Sean Duke (St. Andrew's School, 2020)- Duke impressed with the variety of finishes at the rim he produced throughout the night.  With both hands (and off both feet at times), Duke is a scorer who likes to start with a hesitation dribble that changes speed effectively.

Emre Topcu (Marianapolis Prep, 2020)- Recovering from a torn ACL last February, Topcu is sneaky with his dribble and creates separation with his change of speed & direction.  He has deep range on his shot, and is more than capable of hitting long, contested triples.

Jarron Flynn (Kimball Union, 2020)- Consistent with his effort throughout the night, Flynn really accelerates toward the basket & can finish through contact.  He was also a menace on the defensive end in getting deflections & steals constantly from other guards in the field.

Logan Bagshaw (Greely HS, 2020)- Making the trip south from Maine, Bagshaw continued on his strong spring by continuing to drill 3-pointers from the outside.  His quickness is starting to improve, as well, which will enable him to better defend quick guards at the next level.

Jordan Santos (Bradford Christian Academy, 2020)- Santos has always been able to play above the rim.  His skill is now catching up, and he gets his jumper off quicker due to smoother mechanics.

Jack Poirier (Scituate HS, 2020)- Continuing to build off a solid spring, Poirier displayed exceptional floor vision, especially in transition.  He sucks the defense into the paint with his drive, then has the court sense to see which of his teammates is open for a shot.

Nick Rainone (La Salle Academy, 2020)- Rainone is always shot-ready.  Because of this, he was able to get the ball off quick & capitalize on his teammates ability to get in the lane. He spaces the floor well and plays within himself.

Matt Becker (New Hampton School, 2020)- Becker has had a very good few weeks with strong performances at the NEPSAC Showcase at Milton Academy and various elite camps.  Possessing maybe the best court vision in the field, he sets his teammates up very well with passes off the bounce (with one or two hands), and uses his length to deftly finish around the rim.

Colby Martins (Millbrook School, 2020)- Martins treats every game on the court like it's his last.  His effort & willingness to do the little things in a showcase setting really stood out.  Aside from his shot-making prowess and ability to deliver the ball to teammates where they will be most effective, Martins gets after it on the defensive end and took multiple charges as the night went on.

Carlos Nunez (Lowell HS, 2020)- The lefty can absolutely fill it up.  There are not many guards around who can deliver points in bunches like Nunez can.  He will drill 3-pointers whether or not he is open or contested.  He showed improvement in pulling up going to his right hand, as well.

Spencer Aronson (Catholic Memorial, 2020)- Well-known on the circuit, Aronson is tough to defend because of the crafty step-back & change of speed moves that he has in his arsenal to be able to get his shot off.  Deadly off the catch, his ability to shoot off the bounce in various ways separates him from a lot of guards in the field.

Bryant Ciccio (Attleboro HS, 2020)- Continuing his strong spring season, Ciccio has emerged as one of the steadier points in New England.  In the breakdown session, he confirmed his ability to read ball screens & take what the defense gives him.  Coming off down screens, he also is apt at recognizing overplay & slipping to the basket.

Brett Hutchison (Notre Dame HS, 2020)- Steady as always, Hutchison makes the right play and takes the right shot.  His left hand has improved, which will open up the court even more for him.

Quion Sneed (Wilbraham & Monson, 2020)- Sneed attacks closeouts effectively and sees the weak side of the court very well.  He reads help defenders to see where he can get his teammates the ball for an open shot.  The WMA product also finished in traffic with both hands throughout the evening.