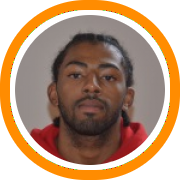 Durant put up big numbers during his career at Wilbur Cross High School in New Haven, especially last season when he established himself as one of the most dominant interior players in the CIAC. Nevertheless, there were questions about how his game would translate to the next level given his lack of size relative to scholarship level forwards.

Over the course of the last six months, he's answered those questions and earned himself a free college education in the process.

It began in the Under Armour Association, where Durant ran with CBC and more than held his own against guys who were not only bigger but also far more celebrated.

That same theme has continued this fall at Putnam Science Academy. While he's generously listed at 6-foot-6, the reality may be a couple of inches below that. Nevertheless, he's been one of the  most consistent stars of their open gyms, and that's on a team that is full of scholarship caliber big men.

It is only due to his toughness, strong body and relentless approach to the game that Durant is able to thrive, primarily inside of 15 feet, while often times giving up several inches.

That's an approach that AIC appreciated and after having him up on an official visit last weekend, they wasted no time in landing the commitment.