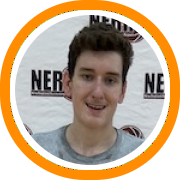 Cain is skilled and bouncy with good instincts and a feel for the game. He also comes from a very athletic family as his parents played at Fairfield and Manhattan, his older sister plays at Nebraska, and his brother pitches in MLB.

The only thing that kept him out of the D1 ranks coming out of high school was a chance for his frame to catch-up with the rest of his tools, but he's consistently added weight so far this year and has a significant upside down the road as he continues to do so.

"Chris has worked hard this fall to change his body and develop his perimeter skills," Cushing Academy head coach James Cormier said. "Cornell's staff saw major growth from his senior year in high school to where he is now. He loves to work and we expect he will continue his progress as he prepares for college basketball in the Ivy League."

He is also the second Cushing product to commit to Cornell in as many years, following in the footsteps of Isaiah Gray.