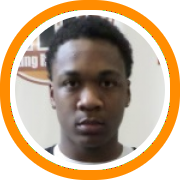 Nyack is an NCAA division II school located in New York that competes in the Central Atlantic Conference.

Pouncey is a 6-foot-3 wing who has long been known for his three-point shooting and ability to make tough shots without much seperation thanks to his especially high release.

Pouncey has always been a naturally strong player but he's also exceptionally long with a +6 wingspan that helps him on both ends of the floor.

The commitment is a significant one not just for Pouncey, whose patience in the process was rewarded with a chance to play at the scholarship level, but also for Commonwealth Academy, who under the direction of former head coach Tony Bergeron, has now sent 17 players from the class of 2017 on to play college basketball at four year college institutions.

That number is certainly a New England record in the 10+ years in which NERR has been in existance and likely for much longer than that.