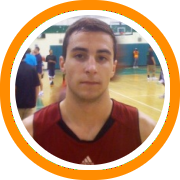 Shane McLaughlin, a six-foot-one point guard currently in his post-graduate year at Choate Rosemary Hall, made a verbal commitment to Bryant University following his official visit earlier this week.

McLaughlin arrived at Choate following a decorated career at Old Tappan High School in New Jersey.  He came up through the AAU ranks with the New York Falcons before playing last summer with the New England Playaz on the Adidas grassroots circuit.

This season at Choate, he earned second team New England honors after averaging 11 points and 8 assists per game while helping Choate to their second consecutive Founders League title and a run back to the NEPSAC finals.

McLaughlin received recruitment from various division I programs in the Ivy, Patriot, America East, NEC, and MAAC but ultimately decided on Bryant after visiting the Smithfield, Rhode Island campus officially on Monday and Tuesday.

He is expected to sign his National Letter of Intent this weekend and will become the second member of this year’s Choate team to do so, joining Boston University bound swingman John Papale.