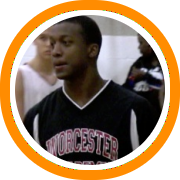 Our updated Massachusetts 2013 rankings begin in a very familiar spot with Worcester Academy guard Rene Castro continuing to hold down the top spot.  Castro has Worcester Academy off to a fast start to their season and looking like one of the top contenders for the NEPSAC AA crown thanks to his leadership and scoring.

Northfield Mount Hermon big man Zena Edosomwan has yet to take the court yet this season, after being sidelined with injury in early November, but there is still no denying that Edosomwan is a true big man who would be flooded with high-major recruitment had Harvard not gotten this one done last year.

Ranked third in the state is Cushing forward Andrew Chrabascz, who will be joining Castro next year at Butler University.  Chrabascz is the epitome of toughness and productivity in the paint, and like his future Bulldog teammate, has his own club off to a tremendous start to the 2012-2013 campaign as Cushing is currently undefeated.

Notre Dame Prep forward Jamel Artis is currently in the fourth spot.  While he undoubtedly has the talent to shoot up this list, he hasn’t yet been able to put the pieces together on a consistent basis.  If he turns the corner in the new year, opponents should beware, since there are few more naturally talented prospects left on the board.

Artis is followed by Notre Dame Prep guard, and Springfield native, Jaylen Brantley, who has his stock heading back up the ladder after a good start to his season.  Prep’s big man in the middle, Matt Atewe, checks in at number six as someone who has been pinging the high-major radar in recent months.

We return to Northfield Mount Hermon for our seventh ranked player, Josh Hearlihy, the former Utah commit who has picked up the slack in Edosomwan’s absence to lead NMH to a fast start of their own.  The eighth spot belong to Roger Moute a Bidias, a high level athlete and defensive specialist in the mold of his older brother Luc Mbah a Moute.

Massachusetts native Pete Miller was another NMH big man who began the season on the injured list, but he’s returned to make a quick impact in recent weeks as the future Princeton Tiger continues to stretch his game to the perimeter on a more consistent basis.

Worcester Academy’s post-graduate big man Darryl Reynolds holds the tenth spots in the rankings while Notre Dame Prep point guard Jarvis Garrett sits at 11.  Future Yale swingman Anthony Dallier has played a pivotal role for NMH thus far this season as they’ve had to compensate for their two missing big men, while Josh Wilchombe and Phabian Glasco are an interior tandem from the MacDuffie School to debut on the rankings at 13 and 14.  Worcester Academy two-guard Matt Panaggio, who committed to Lipscomb earlier this fall, rounds out the list at number 15.

To view the Massachusetts 2013 rankings in their entirety, click here.