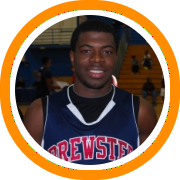 “Georgia Tech, Wake Forest, Oklahoma, Oregon State, Iowa, South Florida, and Rhode Island are the schools that I have offers from,” Carter said.  “Nebraska, Gonzaga, NC State, and Florida State have just gotten in the mix.”

Carter took official visits to Oregon State and Seton Hall this fall, leaving him with three potential visits left for the remainder of the year.

“I’ll most likely take all three,” Carter said, “but I’m honestly not sure.”

Carter has been a consistent scorer and playmaker in Brewster's backcourt this year, playing both on and off the ball for head coach Jason Smith but being recruited primarily to play the point guard position at the next level.

“I believe he can play both spots,” Smith said.  “Lately he’s done an excellent job when he’s been at the point of running offense and creating for others.”

Smith compares Carter to another of his former combo-guards who has proven his doubters wrong since arriving at the college level.

“He’s very similar to Reggie Moore,” Smith said.  “Initially, I thought Reggie would have some trouble as a full time point guard.  However, he’s played major minutes and done well since arriving at Washington State.”

Moore spent the 2008-2009 season at Brewster, and also played primarily off the ball while sharing the backcourt with Tharpe, but has started at the point in all but three of his games since arriving in the Pac 10.

Carter previously starred at St. Anthony under legendary head coach Bob Hurley and originally made a verbal commitment to St. Bonaventure before opting to head to prep school and re-open his recruitment.