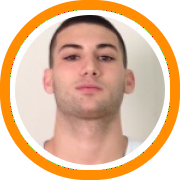 BST held a positional showcase on Monday featuring some individual and positional work followed by five on five play.  Here is a look at the top performers:

Jesse Chuku - The most impressive overall prospect at the event, the six-foot-eight England-native possesses supreme length and athleticism that makes him a game-changing presence on both ends of the floor as an elite low-block finisher and natural shot-blocker.  With a developing offensive skill-set that appears to be rapidly catching up to his natural physical ability, Chuku runs effortlessly rim-to-rim, rebounds the ball in high volume in and out of his area, and showed impressive hands while catching and finishing well above the rim in traffic on multiple occasions.

Kahlil Dukes - One of the premiere young talents in the state of Connecticut, the five-foot-eleven lead guard is an absolute blur in transition, shaking defenders with a creative handle and devastating change of pace to get space for his lethal rise-and-release pull-up or knife through traffic to score over size at the rim from a variety of angles.  While his frame is both small and slight, Dukes more than compensates for his lack of size with a relentless attacking mentality, natural playmaking instincts, and the ability to flat out score the ball in volume from spots all over the floor.

Dimitri Floras - While going head-to-head with Dukes as one of the event’s elite playmaking guards, the Merrimack High (NH) product showcased his craftiness and creativity off the bounce to go with a feathery perimeter pull-up that made him nearly impossible to defend throughout various stretches on Monday.  With great feel and impressive understanding of how to create high-percentage looks for his teammates, Floras consistently looks to push the pace off made or missed baskets and showed a unique ability to turn the corner off high ball-screen action, remain posed in traffic, and make positive plays scoring and distributing the ball in the paint.

Ryan Hartung - A strong, solid athlete at six-foot-five, the Phillips-Andover product is a handful for opposing defenders to handle with his tireless motor and polished offensive skill-set featuring a smooth stroke from the perimeter and the versatility to put the ball on the floor with either hand to attack the rim from the wing.  Hartung knocked down open shots from three, scored the ball through contact in transition, and showed his value as a hard-nosed perimeter defender capable of locking down smaller guards and chasing people off screens with solid lateral movement and deceptive physicality.

Tyler McFarland - The reigning Mr. Basketball in the state of Maine, McFarland showed the versatility and athleticism attacking the rim and defending multiple positions that will make a valued addition to coach Barry Connors at Cushing this fall.  A strong, tough-minded player who plays with a unique blend of physicality and poise, the six-foot-six scores the ball with ease in transition, shoots the ball consistently from three, and is a constant threat attacking the offensive glass with his high motor and terrific bounce around the rim.

Jamie Holder - The six-foot-two, Milford, New Hampshire native attacked the rim with conviction throughout the evening on Monday, using his explosive first burst and quick bounce to leave his initial defender and elevate in the lane to score at the rim over late-arriving help.  An elite athlete who would benefit from some added muscle and a more consistent perimeter jumper, Holder has the potential to surprise teams next year at Notre Dame Prep with his ability to break defenders down off the dribble and score over bigger players from a variety of angles.

Clayton Palmer - A true wide-body big with soft hands and a polished back-to-the-basket arsenal, the Vermont native showcased an improved, trimmed physique that allowed him to sustain his effectiveness for longer stretches in a high-paced setting and pursue the ball off the glass with heightened intensity on the interior.  Palmer is a load on the low-block when he works to establish position against less-physical defenders, and, with continued work on his body and conditioning, he projects as a legitimate low-post scoring option capable of putting up consistent numbers due to his skill and efficiency around the rim.

Tevin Falzon - An intriguing prospect at six-foot-seven with terrific length and deceptive bounce around the rim, the Newton North (MA) product is dynamite scoring the ball in transition and showed versatility in being able to knock down shots from the perimeter and attack smaller, less-physical players off the bounce.  A smooth, natural athlete who appears to still be realizing his ability as an impact player on both ends of the floor, Falzon possesses tremendous upside as a highly-skilled swingman capable of scoring the ball in a variety of ways and rebounding in high volume on both ends of the floor.

Aaron Falzon - The younger of the two Falzon brothers and one of the elite young bigs in the Greater Metro Area, the six-foot-seven, face-up four was one fire from behind the line on Monday, showcasing his ability to stretch the defense and knock down shots in bunches in front of defenders uncomfortable with playing him out past the free-throw line extended.  With a long, lanky frame and a rapidly developing perimeter skill-set, Falzon will benefit from added muscle that will improve his ability to catch and score through contact around the rim and defend and rebound against stronger, more physical players looking to induce him into a tougher brand of basketball in the paint.

Jaylan Alicia - A third version of the multiple attacking, score-first lead guards who showed well at Monday’s event, the five-foot-ten Lawrence High (MA) product was difficult to stop with the ball in his hands in the open floor, as he made retreating defenders pay on multiple occasions with a pure, stop-on-dime pull-up in front of an outstretched hand.  With a quick, compact release, Alicea needs little room to get his shot off in traffic, and, when defenders finally started to pay his stroke respect out past the arc, he used his quickness and creativity with the dribble to draw two at the second level and thread the ball to open teammates for easy scores near the basket.

Harry Rafferty - While lacking the explosive, blow-by ability of Dukes and Alicea, or the creativity of Floras off the bounce, the six-foot Maine native is a steady, stabilizing presence at the lead guard position, adept at locating open teammates with his high basketball I.Q. and knocking down open shots off reversal with a pure left-handed stroke from three.  Rafferty throws the ball ahead in transition, is a solid angle defender committed to keeping more athletic players in front, and features a confident, competitive presence that drives his willingness to take and make big shots and make the players around him better.

Mike Lombard - A big, physical guard at six-foot-three, Lombard spreads the floor with a pure stroke from the perimeter and the ability to hit shots in volume from all over the floor with a quick, textbook release from distance.  The Proctor Academy product features a high I.Q. approach, spacing himself well off dribble penetration to create room for high percentage catch-and-shoot opportunities and attacking close-outs efficiently for one-dribble pull-ups in either direction.