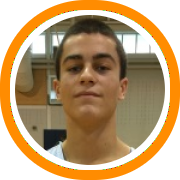 Needham High School and Middlesex Magic point guard Thomas Shaughnessy made a verbal commitment to Brown on Monday, just one day after the conclusion of the July recruiting period.

Shaughnessy's recruitment actually dates back to last summer when he starred for the Magic's u16 team before being called up to the u17 squad for July.

He rode that wave of confidence into the high school season and ended up leading Needham to the MIAA D1 South Sectional Championship as he averaged over 23 points per game along with 4 assists, 3 rebounds, and nearly 3 steals per game.

This spring he returned to the Magic and asserted himself as the team's undisputed leader in what ended up being one of the club's most succesful seasons in recent memory with an overall record of 44-7 and spring championships at the Northeast Hoops Festival, Pittsburgh Jam Fest, and Super 16 Showcase.

This July, the Magic went 17-5 and took the championship at the Big Apple Showcase as Shaughnessy averaged over 21 points and 5 assists per game.

"Thomas is easily oe of the toughest, hardest working players we have had in our 24 year history. He is the definition of a coach on the floor, leading his teams with constant energy and communication," Magic director and head coach Michael Crotty Jr said. "His passion for the game is the strongest I have seen since taking over the program and he pushes his teammates to lengths they didn't imagine possible."

That work-ethic was also apparent in the way Shaughnessy's game evolved with each passing year as he developed himself into both a tough shot-maker as well as a lead guard with a college ready body. Along the way, he's also made a habit of knocking down game winning shots.

"He is a flat out winner," Crotty said, "and his toughness and leadership are the traits that made Mike Martin and the Brown staff recruit him for over two years. Thomas has the ability to make an immediate and indelible mark on the Brown basketball program and the entire Magic family can't wait to support him and Brown throughout his career."

Shaughnessy is the second local product to commit to Brown so far in the class of 2018 as he joins Mass Rivals and Belmont Hill wing David Mitchell to form the foundation of what is shaping up to be the best recruiting class Brown has seen in quite some time.

Below are highlights of Shaughnessy during the recent July recruiting period.