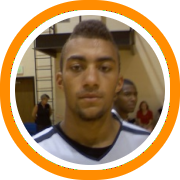 Last month Denzel Brito told us that he was considering a return to New England for a post-graduate year.  Not 100% satisfield with his college options, Brito hoped that another year would help him to prove himself in the eye's of college evaluators and generate more options.

Well apparently Brito's mindset changed within the last four weeks as he committed to Loyola Chicago late on Tuesday night and will join their 2010 recruiting class.

Brito is a talented guard known for both his offensive and defensive abilities.  A good athlete who knows how to put the ball in the basket, he is both an efficient slasher as well as a much improved jumper shooter.  Defensively he's equally capable of locking down the opposition's best perimeter scorer.

Brito helped lead Lawrence Academy to their most recent NEPSAC Class C title this year and also starred on the gridiron, where the Spartans also took a championship during the fall season.

The Massachusetts native had a scholarship offer from UConn as well as a wide range of basketball interest over the course of the last year.  Ultimately, he selected Loyola over Hofstra, New Hampshire, and Florida Atlantic.

His commitmentn is a significant one for Loyola because not only does he have the talent to make an impact in a mid-major conference like the Horizon League, but at this late date he is one of the best available guards left on the board.