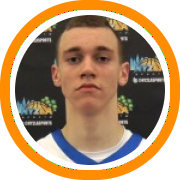 Brewster Academy post-graduate big man Zach Cameron-Chodes made a verbal commitment to Kennesaw State on Tuesday after taking official visits to both their campus as well as Eastern Kentucky in recent weeks.

A native of Missouri, who previously starred at Parkview High School, Cameron-Chodes returns closer to home to play for longtime Boston College head coach Al Skinner, who just completed his first year at the helm of the Kennesaw State program.

A six-foot-ten big man and high level athlete in the paint, Cameron-Chodes is unusually explosive for a player his size and consequently projects as a unique weapon in the Atlantic Sun Conference.

He becomes the sixth member of this year's Brewster Academy team to commit to a division I school with other commitments to Northwestern, Colorado, Wichita State, South Florida and Lehigh.

Below are some of Cameron-Chodes AAU highlights prior to his arrival at Brewster.