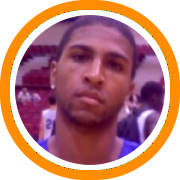 There were 90 teams and 30 pools in the u17 division alone.  But the local teams were more than holding their own as 11 New England teams won their pool.  The New England Playaz, Mass Rivals, Expressions Elite, Connecticut Basketball Club, Connecticut Select, Metro Boston, Bay State Magic, Connecticut Knights, Greater Boston Lions, Boston Warriors Blue and Boston Warriors all advanced to the Gold Bracket which tipped off on Saturday night.

Several of those squads scored wins in the opening round of bracket play which set up two huge local match-ups in the round of 16, both of which would take place at Providence College on Saturday night.  The New England Playaz would face-off with the Mass Rivals while the Connecticut Basketball Club would run into Expressions Elite.

The Playaz/Rivals game in particular was widely anticipated as it not only featured two of the top programs in the entire northeast, but also three of the top five juniors in New England in the Playaz’ Nate Lubick, and Rivals’ Evan Smotrycz and Carson Desrosiers.

The Rivals came in riding a big wave of momentum having blown out U-PLAY with a huge offensive outburst in the opening round.  It was more of the same in this game as head coach Vin Pastore’s offense was clicking on all cylanders.

Evan Smotrycz was the catalyst as the Michigan bound forward really brought his game to another level.  Not only was he making shots from the perimeter, but he also showed a much improved dribble drive game, as he was able to break his man down with a right to left cross-over on more than one occasion.  But it wasn’t just his ability to score off the dribble that was so impressive as he also passed the ball tremendously well, acting as a facilitator in the second half with his ability to create open looks for his teammates.

Jordan Laguerre and Matt Brown were also pretty darn good on Saturday night.  Laguerre, who is a terrific dribble drive player in his own right, got it going from downtown in the opening round as he connected for six three-pointers.  As for Brown, he picked up right where he left off in Pittsburgh last week as he was at his best again today.  We loved what we saw from the 6’3” guard as he was more efficient offensively than we’ve seen him in a long time, making good use of each dribble and taking (and making) shots with both legs under him.

Carson Desrosiers was up to his normal tricks in the second half as he went for 12 points in the last 16 minutes with a series of long jumpers.

Naadir Tharpe and Nate Lubick took turns leading the Playaz although fatigue certainly seemed to play a part by the end of the night, as the Playaz played four games on Saturday with only six players in uniform.  Tharpe was outstanding in the team’s opening round of bracket play as he picked apart the opposing zone with his dribble penetration and ability to thread the needle with his passing.  Lubick was a rebounding machine in that game, as we would guess he was close to pulling down 20 boards.

In the other local match-up, CBC and Expressions faced off in an elimination game for the third time in as many weeks.  Tonight’s rubber match went to CBC thanks to the heroics of Majok Majok.  With just five seconds left in the game, Expressions clung to a one point lead when CBC was set to inbound the ball under their own basket.  They called a time-out and drew up an alley-oop play out of a line set.  As the play developed it looked like it would work to perfection, until at the last moment an Expressions defender got a piece of the ball.  But Majok tracked down the loose ball in a congestion lane and layed it in to give his team the one point edge and subsequent victory.

The interior play of Majok, Jefferson Lora, and Will Tye was really the story for CBC in this game as they pounded it down low with good results for most of the night.  Majok finished around the rim for dunks and also showed an emerging repertoire of moves with his back to the basket.  Lora forced the defense to pick their poison as he consistently scored against single coverage and continued to show a terrific passing ability against double teams.  As for Tye, he is an absolute beast physically.  His long term prospectus may be better on the football field where he is a high major tight end prospect, but it’s scary to think just how dominant an interior presence he could be on the hardwood if he ever committed solely to this game.

Other notables for CBC included:  Steve Glowiak going off for 24 points in the final pool play game; Phil Gaetano throwing the best pass we’ve seen all weekend when he went behind his head with his left hand and hit Majok right in the hands with under a minute to go in a close first round game; and Luke Matarazzo’s consistent aggressiveness on both ends of the floor.

Expressions was led by Billy Baron who was arguably the most dominant player on the court in the second half.  He could probably be best described as a clever scorer in this game as he showed the veteran savvy and craftiness to put the ball in the basket in a number of ways.

Tyler Olander, Joe OShea, and Eric Ferguson were also impressive at various times.  Olander looked especially good in Expressions’ opening round win when he was flying at the rim for offensive rebounds, scoring inside with his back to the basket, and stretching the defense out to the three-point line.  O’Shea didn’t necessarily do any one thing to wow you but after watching him play for a couple of games in a row you get a good sense of just how intelligent and efficient he is on the floor.  As for Ferguson, his impact is starting to be felt on a more consistent basis by the week.