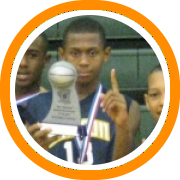 The Boston Warriors came home from Detroit Michigan and the AAU Division II Nationals as champions a couple of weeks ago as the u12 team finished with a 7-1 record in the tournament to take the title in the classic bracket.

The Warriors opened the tournament with a come from behind win over The Bueaters (Indiana).  Trailing by 8 points heading into the fourth quarter, big man Ishman Williams took over and finished with 31 points and 16 rebounds.

Their second pool play victory was no less dramatic as the Warriors trailed Team White (North Carolina) for most of the game despite the three-point shooting of Eddie Fish.  With only 39 seconds remaining in the game the backcourt of Tim Preston and Kareem Davis forced Team White into turnovers which resulted in back to back transition baskets for the Warriors that pushed them to the late victory.

The Warriors would see their only loss of the tournament in their final pool play game as they fell to the United Celtics (Atlanta, Georgia) despite battling back from an early deficit to make it a one possession game going into the final two minutes of the contest.

The Warriors scored a convincing victory over the Southfield Lakers (Michigan) in the opening round of bracket play.  The frontcourt tandem of Williams and Marques Richardson led the way in what was a well rounded team effort.

The next round featured a match-up with the Cincinnati Rockers (Ohio) and that provided Davis with an opportunity to shine as he attacked the rim successfully on several different critical possessions to lead the team to a 9 point victory.

In the Elite Eight against the Tar Heels of North Carolina, the Warriors took a commanding lead out of the gate by 20 points in the first quarter.  However, the Tar Heels would storm back and bring this game down to the wire, where Mike Hagopian’s crucial free-throws allowed the Warriors to advance to the semi’s with a 69-65 win.

The Final Four featured a match-up with the Anderson Warriors (Illinois) and this was a well contested game from start to finish.  Ultimately, Boston utilized a balanced attack and good overall team effort and Hilal Dahleh made both a big defensive stop and a momentum changing basketball which were instrumental in securing the 60-53 win.

The finals featured a match-up with a very strong local Detroit team, FIST.  But the Warriors were able to neutralize their opponent’s home court advantage by coming out and playing their best game of the tournament.  FIST had two potentially dominant big men who were dunking in warm-ups to go along with a strong, quick backcourt.  However, the Warriors frontcourt of Williams, Richardson, Fish, and Hasten Kearse shut down the opposing big men and prevented them from controlling the glass as they had done throughout the tournament.  Williams in particular locked up on the defensive end as the Warriors’ utilized a box and one strategy against FIST’s exceptionally talented big man.

With the defense clicking on all cylinders that fueled the Warriors running game which was led by Preston and Davis.  The backcourt tandem complimented each other extremely well and delivered a solid effort on both ends of the court throughout the game.  Fish contributed with a couple of his patented perimeter jump shots in the opening quarter, while Williams and Richardson provided production inside the paint.  The final result was a convincing 57-44 victory for Warriors as head coach Ted Fish and his squad took the championship back to Boston.

Williams and Davis led the team in scoring throughout the week with 16 and 14 points per game respectively.