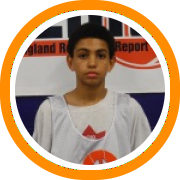 New England Recruiting Report was once again in attendance for the third annual Boston Best 40 at The Rivers School in Weston, MA. The morning session consisted of mostly sixth and seventh graders (with a couple of eighth and ninth graders sprinkled in), while the afternoon session included players who, for the most part, are entering grades 8-10.

Players in the morning session were worked out by La Salle Academy(RI) head coach Bill Black, and they also went through a series of rebounding, ball handling, defensive, and shooting drills, followed by 5-on-5 games and an all-star game. Afternoon session players went through a similar introductory workout and they also took in a short lecture regarding positive habits that can translate basketball success to success in the real world past basketball, from Hoopville’s Phil Kasiecki.

Charles Hannah, 6’1 ½ 7th grader, Gates Intermediate School-Scituate(MA)-Charles is a true big man with a ton of long-term potential because of his length, defense, basketball IQ, and rebounding. As with any developing big man, his comfort-level with the ball in his hands in the paint will increase over time. For the most part his scoring today came off of offensive rebounds.

Ulyen Coleman, 5’6 7th grader, Trinity Catholic Academy-Brockton(MA)-Ulyen was one of the best outside shooters in the morning session, he has a quick trigger and looked for any opportunity to score off of a catch-and-shoot from beyond the three-point line. The left-hander is also a crafty finisher, and he pulls down rebounds with regularity.

Galvyn Charles, 5’8 8th grader, Trinity Catholic Academy-Brockton(MA)-He showed superior strength over his opponents all morning long. Galvyn has a quick first-step that he uses to get by defenders, and a very built body that enables him to often finish in traffic with ease. He made the hustle plays that coaches love: coming out of nowhere for rebounds, diving for the loose ball, and flying out of nowhere to save a ball going out of bounds.

Shyheim Hicks, 5’10 8th grader, Trinity Catholic Academy-Brockton(MA)-Though Shyheim was one of the bigger players at the morning session, he was at best on the perimeter or on the break when the ball was in his hands. His jumper is a work in progress, but he grabbed some tough rebounds and had some dazzling finishes going to the basket.

Terrel Williams, 5’11 9th grader, Bridgewater-Raynham Regional High School (MA)-Terrel’s game reflected a lot of intelligence during the morning session; he constantly moves without the ball and looks for any opportunity to cut to the rim and get an open pass. He is long, rebounds, and is only going to becoming even more effective as he grows and becomes stronger.

Elijah Hemingway, 5’1 6th grader, Charles E. Brown Middle School-Newton(MA)-Elijah displayed exceptional outside shooting throughout the morning session, but turned his game on even more for the all-star game. He knocked down three’s, finished lay-ups in traffic, and stood out defensively over other kids in his age group.

Ju’Quan Mills, 5’2 8th grader, Rivers School-Weston (MA)-Ju’Quan understands the game more than most players we saw at either session today. He is in constant movement without the ball, he instinctually fills gaps offensively out on the perimeter, seems to get a hand on every loose ball, throws passes on point, and rarely turns the ball over despite how often he finds the ball in his hands.

Geo Baker, 5’4 8th grader, Derry Middle School (NH)-Geo showed the same cool composure today that he showed when we saw him at Scott Hazelton Camp. His emotion never wavers, and neither does his intensity and intelligence on the court. He made difficult passes with confidence, dribbled as if he had the ball on a string, and showed impressive outside shooting mechanics. He is still figuring out whether he will re-classify at Buckingham, Browne, & Nichols this fall as a 7th grader, or if he will return to Derry Middle School as an 8th grader.