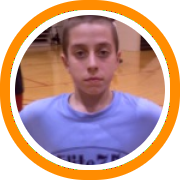 The New England Recruiting Report was on hand for the first day of the second annual Boston Best 40 Recap. Day one featured top rising 6th and 7th graders from Boston and the greater Boston area.

Players arrived at 9 am and were greeted by AAU, high school, and college coaches. The youngsters were put through a combination of drills, clinics, and games to develop their skills, teach them something new, and give them a chance to showcase their talents. In the morning, the players participated in full court drills including outlet drills, ball handling drills, passing drills, the 3 and 5 man weave drills, and 4 vs. 4 with no dribble. After these drills were completed, players went through a circuit of 12 minute stations focusing on attacking the rim, shooting, defense, ball handling, and conditioning.

The afternoon featured several games, giving players the opportunity to use the skills they learned in the morning and showcase their ability.

Players who rose above the pack:

Azar Swain 5’1 PG St. Francis MS 6th Grade
Azar impressed onlookers and proved himself to be the best guard at the event. He is a tremendous point guard and showed the ability to take over a game offensively. Swain could score in a variety of ways. He attacked the rim, showed great touch on several floaters, and the ability to knock down the long ball. If he keeps developing, the future is bright for this youngster.

Mike Hagopian 5’1 SG Watertown MS 7th Grade
Hagopian is a knock down shooter who can catch fire at any point. He has the ability to fire with range off the catch as well as create his own shot off the bounce.  He has a quick first step, can get to the rim and scores in bunches

Matthew Catizone 5’1 PG St. Agnes MS 7th
Catizone is a great point guard who is extremely unselfish and makes his teammates around him better. He is a heady player who handles the ball on a string and makes great decisions. Defensively, he pressures the ball and creates turnovers.

Shyheim Hicks 5’8 SF Trinity Catholic 7th
Hicks is an athletic and versatile young wing who scores in bunches. He has a quick first step and finishes around the rim. On the perimeter, Shyheim is capable of draining the open three or making plays off the bounce. He defends and rebounds well.

Marques Richardson 6’1 F Watertown MS 8th
Richardson is a long, strong athletic combo forward who has coast to coast ability. He is a leaper who blocks and alters shots and rebounds extremely well at both ends of the floor. He handles the ball well for a kid his size.

Will Weitzel 5’11 SF Roxbury Latin 7th
Weitzel is an aggressive forward who isn’t afraid to mix it up inside. He works hard on the glass and runs the floor wells. He finishes in transition with either hand and plays hard every possession.

Jamal Allen 5’9 SG Rogers MS 7th
Jamal is a long athletic lefty combo guard who has a solid basketball IQ for his young age. He is great off the bounce attacking the rim but can also shoot it out to three. In transition, Allen makes good decisions and finishes with contact.

Caeser Adim 6’2 SF Orchard Gardens MS 7th
Caeser was the biggest and most athletic player at camp. He has a great back to the basket game, but is also versatile enough to handle the ball in transition and attack from the perimeter. His length and athleticism make him a difficult matchup for any defender.

Stay tuned in to NERR as we will be covering all the action Sunday as the 8th and 9th graders come in for the second day of Boston’s Best.