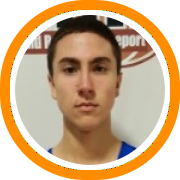 Hampton, NH-- The New England Hoops Festival kicked off on Saturday at The Rim in Hampton.  Partnering with Zero Gravity and HoopRootz, NERR was on hand to evaluate the top players at the event.  Pool play will continue through early afternoon on Sunday, then the playoffs will pit the top teams against each other late on Sunday. Those below stood out throughout their respective team's effort on Saturday:


Nick Pasquale (VB Chaos)- The big man has a wide rebounding range and is quick off his feet to grab boards in his area.  Playing against a zone, he is quick to receive the ball in the high post and look for the open shooter on the opposite side of the court.  Defensively, he intimidates opponents into taking rushed shots because of his length and closing speed.

Rich Harrington (Central Mass Thunder)- Harrington was one of the breakout stars on Saturday at The Rim.  The 6'7 Sutton HS product displayed a nice outside shooting touch with the range that will be able to stretch the defense.  He cuts hard off the many "screen-the-screener" actions that the Thunder ran for him, and was able to get several easy layups.  He finishes strong every time with his shoulders square to the hoop and exploding up, which maximizes his power.

Deondre Rhoden (Metro Falcons)- Making the trip from New Jersey, Rhoden has a big frame that enables him to control the glass.  He has also developed a nice baseline-spin move that enables him to get by his defender in the post.  We are looking forward to seeing more of Rhoden in the near future.

Kevin Durkin (VB Chaos)- Durkin is a skilled big man who has a bright future.  He ran the baseline against the opponent's zone, and was efficient in catching, locating, and scoring.  He is also solid on the boards, forming a 1-2 inside punch with Pasquale that is hard to stop on the AAU circuit.

Bala Thaim (Metro Falcons)- Another 1-2 punch in the post was seen between Thaim and Rhoden for the Metro Falcons.  Thaim has broad shoulders that should be able to support more muscle in the future.  He goes and gets the ball at his highest point, and does not give up offensive rebounds.  He is a hard-working big who has a bright future ahead of him.

Joey Roberts (Wellesley Basketball Club)- Roberts got in the lane at will.  He goes hard to the hoop when he has the chance.  Roberts has a strong upper body that allows him to finish through contact.

Malik Rochelle (Wellesley Basketball Club)- Rochelle was very impressive on Saturday.  He works hard at getting open off the ball, and attacks the lane when he gets the ball.  He also sports a solid pull-up jumper that gives him a midrange weapon that is not seen enough on the amateur level.

Troy McLaughlin (Metro Falcons)- McLaughlin is a skilled off-guard with good size and brings a physicality to his game that makes him difficult to guard.  He has a tight handle and does a good job of getting his defender on his hip.  This allows McLaughlin to keep his position and not let his defender in front of him.

Erick Solic (Evolution)- One of the best freshman in the field, Solic is a guard who is an all-around offensive threat.  He can finish through contact, and is very good at running the fast break.  He is one to watch for the class of 2017.

Craig Preston (Evolution)- Another Evolution freshman, Preston is a point guard who excels at controlling the pace and tempo of a game.  He is proficient at getting everyone on his team involved in the offense, and is fun to play with because when he gets the ball, his teammates know they are going to get it back if they are open.

Nick Simpson (Elite Potential)- The 6'4 guard is an athlete.  His explosiveness was on display several times on Saturday night.  His skill level has improved over the past couple of years, and it showed with his all-around solid performance.

Jordan Mello-Klein (MABC)- Mello-Klein is a lefty guard who excels at leading the break with an effective first pass.  He possesses a nice floater that extends over the defense, and has a good change-of-speed hesitation move.  He also proved to be clutch in one of the best games of the day at The Rim by putting his MABC team up with two free throws with half a second left in double OT.

Luke Cowen (VB Chaos)- The guard has a smooth, easy-flowing shot that allowed him to connect on several treys during the Chaos' game on Saturday.  With shooters at a premium, Cowen has a skill that will translate well to the next level.

Trevor Kovac (VB Chaos)- Playing for the 10th grade VB Chaos squad, Kovac is an efficient guard who plays at his pace; he does not get sped up by the opposition.  He has a nice jumpshot, and the lefty was good at setting up his teammates for open shots.

Izaih Winston-Brooks (MABC)- The lefty guard runs the floor well and is excellent at finding the open man off of penetration.  Several times, he realized that help was coming from the weakside block, so he would simply dump the ball off to his teammate on the block.  Winston-Brooks proved to be a very good interior passer for a guard.

Branden Bousquet (Central Mass Thunder)- Bousquet served as a perfect compliment to Harrington in the Thunder frontcourt.  He is a bruiser who is not afraid to play physical down low.  He boxes out to clear space for his team to get defensive rebounds.

Nick Tremelay (Central Mass Thunder)- Tremelay went off on Saturday, nailing seven 3's over the course of one game.  He had the opposing coach in fits throughout the second half.  This stretched the floor for his teammates to drive to the basket.