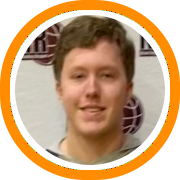 This year’s Bridgton Academy team consists of prospects for all levels of college basketball – from a potential high-major division I recruit all the way to small college D3 recruits.

It is a team that likely would have been one of the program’s most recruited groups in recent years, had this been a normal season in normal times.

Of course, both this season and this year have been anything but normal, and so now Bridgton Academy serves as a destination for college coaches of all levels to potentially be able to find late value.

Muzamil Hamoda, a 6-foot-7 wing from the country of Bahrain, is probably the highest-level individual prospect the program has had since 2015. He’s only in the early stages of his development but he checks a lot of bounces with his size, fluidity, athleticism, versatile offensive tools, defensive characteristics, and solid overall feel for the game.

Tyler Chapman is the man who runs the show and someone who exceeded all of our expectations. The NYC product is very talented with the ball in his hands and both a gamer and true leader. He doesn’t yet have a full scholarship offer to his name, and if he slips to the D3 level, it will be a steal of epic proportions.

There are a couple more quality pieces up front in Jaden Ezomo and James Mariech, who start alongside each other at the four and five respectively. Ezomo is an upstate New York product who has been one of the team’s most aggressive and consistent scoring threats. He’s powerful, with a college ready body, and able to put points on the board in a variety of different ways.

Mariech is a huge physical presence standing every bit of 6-foot-10 with a strong build. He’s still relatively new to the game, after growing up as a soccer player, but has made been rapid strides this year and has clear long-term potential.

His back-up, Melvin Kolenovic, has also taken his game to new levels as of late.  The Connecticut native is physically strong, a willing banger inside, increasingly dangerous finisher, and now starting to show more face-up potential as well.

In the backcourt, Brandon Kulakowski has been a frequent starter alongside Chapman. He’s a very good shooter from behind the three-point line but solid across the board with his skill-set, able to handle the ball capably, knock down pull-ups, and be a steady threat within the offense.

Stephen Gabriel and Kaelan Walters have solidified the team’s backcourt depth. Gabriel is a slick handling guard from Brockton who has pace and a tight handle alike to provide some playmaking for the Wolverines. Walters is a high-energy guard and capable driving threat himself who can plug a variety of holes.

The most pleasant surprise of the year so far has been Matt Aebersold, a native of the Netherlands who just keeps growing and getting better on a consistent basis. Aebersold was little more than 6-foot-2 when he visited campus last spring but looked right around 6-foot-5 when we visited campus last week. He was playing hard, being a great teammate, and drilling spot-up shots.

Unfortunately, Robby Phillips, a 6-foot-6 forward out of New Jersey, was out of the line-up with injury when we watched, but is reportedly another hard-working and improving prospect for the next level.

Of course, the man running the show is head coach Whit Lesure, now in his 24th year at the helm of the program after previously coaching at New Hampton and then the University of New Hampshire. Lesure is a true legend in the prep ranks and absolutely one-of-a-kind, not just because of his six championships or 250-plus alums who have gone on to play college basketball, but because of the throwback style honesty, tenacity, and ability to teach the game that you just don’t find many places these days. It’s the reason why all eleven players on the roster have improved by leaps and bounds since there arrival…and also the reason why that seems to happen every year.