Bergmann Staying in Vermont After All 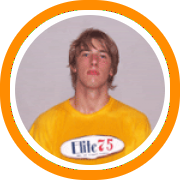 In August when Pat Bergmann shined at the New England Elite 75 Showcase he was a player flying under the radar.  After that performance his reputation began to grow and he eventually committed to Quinnipiac University in Connecticut.  With the Bobcats making a coaching change this off-season and Bergmann having just turned in a dominating performance during the Vermont High School season, he had an opportunity to re-evaluate his options.  As it turns out it didn’t take long for the skilled big man to decide he wanted to stay at home and play at the University of Vermont.

With two other local talents electing to go elsewhere in Matt Glass heading to UMass and Tyrone Conley to New Hampshire, the Catamounts were anxious to keep Bergmann at home as soon as he became available.  It didn’t take long for them to get it done either as Bergmann signed his binding national letter of intent on the first day possible.

The state of Vermont was traditionally an area dominated by the sport of hockey until five years ago when then Head Coach Tom Brennan led his team to their first America East title and NCAA tournament appearance.  The feat was duplicated twice over as the Catamounts three-peated only to see their head coach retire and their two best players, Taylor Coppenrath and TJ Sorrentine, graduate.  Since that time the people of Vermont have embraced the game of basketball like few others and have made Patrick Gymnasium one of the toughest low-major destinations in the country for opposing teams.  Current head coach Mike Lonergan, who just finished his second year at the helm, has been able to continue that tradition of excellence as he has led the Catamounts to the America East Championship game in both of his seasons.  Further more, the future looks bright as rising junior Mike Trimboli (from Trinity Catholic HS/St. Luke’s School in Connecticut) is likely the best returning player in the America East Conference.

With the program’s strong following in the state and recent success it is no wonder that Bergmann would jump at the opportunity to stay at home and help his state university continue their recent tradition of excellence.  At 6’10, Bergmann has both good size and an impressive skill set.  He is versatile enough to score with his back to the basket or pull opposing shot blockers away from the basket with his shooting range, which makes him an ideal fit in Coach Lonergan’s flex offense.

Additionally, Bergmann is also a player who is still likely to get much better.  As he continues to add muscle to his frame and gets adjusted to playing tougher competition, his game is bound to grow by leaps and bounds meaning he could be a very important player for Vermont before his career is over.