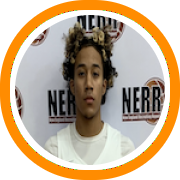 On Monday, we profiled Rhode Island Elite’s u17 team, and while it is an undeniably talented group with multiple scholarship prospects, the reality is that the program’s u16 team is even deeper and more talented.

The best prospect in the gym was undoubtedly Isaiah Miranda. A 7-footer in the class of 2023 who spent last season at the Phelps School in Pennsylvania after not getting varsity minutes in Rhode Island the year prior.

Miranda is still extremely raw and only just beginning to realize a hint of his potential, but when you’re legitimately seven-feet tall and move the way he does, it isn’t about what you are right now, it’s about establishing the habits and mindset to develop what you could be down the road. And if he falls in love with the game and commits himself to it, there’s no telling what he could be down the road.

Stay tuned later this week for our story on their u16 team including big man Isaiah Miranda (IsaiahSaMiranda)pic.twitter.com/yFxvkozm7L

RI Elite actually has a second prospect in the class of 2023 who already holds a D1 offer in Omela Mudogo, an athletic rising sophomore with extremely long arms who looked vastly improved after his first season at Vermont Academy.

Jose Batista, the younger brother of Frankyn Batista, arrived in the United States just months ago from the Dominican Republic, where he plays for the national u16 team. With the same motor as his big brother, but with more guard skills, he’s another talented young player to watch closely moving forward.

The rising junior class of 2022 has several interesting prospects:

Josiah Diaz, 6-7, C/F, Storm King (NY) – A wide-bodied big man who can create space and has a skill-set, both around the rim and facing the basket. He has good hands, passing potential, and even a soft touch facing the basket.

Marquise Buchanan, 6-3, G, Classicial (RI) – Our introduction to Buchanan showed an intriguing long-term prospect with good perimeter size, a quick first-step, solid length and athleticism, and a foundation of skill to keep developing.

Royce Williams, 6-0, G, Trinity (NH) – Reportedly one of the NHIAA’s leading scorers, Williams is a highly skilled guard who shoots it extremely well from three, is equally polished with his handle, and throws dart off the dribble as a passer with both hands.

Alvin Baez, 6-3, G/F, Cranston East (RI) – Coming off a breakout season in which he put up over 17 points per game in D1 of the RIIL, Baez is a solid athlete with good size who can make shots and could very likely end up in the class of 2023.

Gus Holch, 6-5, F, Providence Country Day (RI) – He has an intriguing body type with long legs and a solid build that could still be stretching out. He plays strong with the ball, could put it on the deck, and competes with a high-motor.

Lincoln Drew, 6-3, G/F, North Providence (RI) – A budding wing with a long and athletic body type, Drew has upside as a slasher and defender as he continues to develop his skill-set.

Check out the full video detailing the Rhode Island Elite program in its entirety: