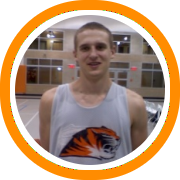 Basketbull held their fall Junior/Senior Showcase last night at Holyoke Community College, and as people are beginning to expect, the event was a big success drawing student-athletes from across New England.

Organizers Colin Tabb and Chris Sparks began the event with a brief introduction and then divided the group into teams and for an hour of stations, putting special emphasis on the amount of detail during that period of instruction.

Some of New England's best came out for the event.  Here are some of the players who really stood out to NERR.

Two new additions to the region, via Prep Schools, who really showed that they are poised to have big seasons this winter are Mitch Amelio and Nate Vernon.

Amelio, a native of California, who reportedly has already been offered by UMass Lowell showed some real flash to his game. Everything from his crossover to his gold sneakers shined all night, as he buried jumper after jumper, and finished in traffic. He also made a number of great passes, where he seemed to make space through the defense to get the ball to his teammates. Amelio is just one of the many talented players that hope to bring home a Western New England Crown this season for Coach Chris Sparks.

Vernon, who hails from Chapel Hill, North Carolina certainly is not known for the flash to his game, but Vernon can play. The 6'5" marksman, seemed to knock down every open shot that he was presented all night. A natural shooting guard, Vernon rebounds surprisingly well for his position, which is something that college coaches at all levels love to see. It was easy to tell how Vernon, earned his nickname "Money Earning" on this night. Vernon should be able to stretch defenses across New England with is deep range, which should open up lanes for teammates Xavier Pollard and Allen Harris at Suffield Academy this winter.

Speaking of Allen Harris, the 6'5" swingman had a very good night for himself as well. He showed off a stronger frame since we last saw him in July. He also showed that he has been working on his range, as he connected from three point land throughout the night. Harris was at his best when he was going to his trademark mid range game, and slashing and finishing at the rim.

Another swingman who shinned brightly at the event was 6'3" Ellis Cooper of Northampton High School. There may not have been a better combination of effort and skill on this night. Cooper has the ability to play a number of positions on the court because of his strength. He matched up with wings and bigs alike throughout the night and did a great job on both. Cooper also finishes well in traffic, and has really shown in the past few months that he is working on stepping out and becoming a shot maker, not just a slasher.

Robbie Burke was another multi-faceted player who did a lot to raise his stock this summer, and played very well on this night. Burke is another athlete that can play a number of positions from the wing to the post. He defended well, and made tough shots all night long. He is a hard nosed player who will not back down from anyone.

Ishmael Kalilou - The 6'7" big, made some great moves off the bounce. He finishes well with contact, and rebounds well.

Jake Donnelly - The Vermont native has some of the best body control in the region. He eludes defenders to make shots and great passes alike.

Brandon Sherrod - He is a beast. There is not other way to put it. See Charles Barkley.

Zach Askew - The long junior has been working on his game, and it is starting to show. He has always rebounded well, but Askew is showing some nice touch around the hoop as of late.

Jesse Coulon - Coulon is a great shot maker. He is lethal from long range, and is a leader no matter who he is playing with on the court.

Ethan ODay - He continues to grow. He keeps getting better. He still is no where near his ceiling. He has nice touch around the hoop, and if you are not ready, prepare to be dunked on.

Russell Deremer - He knocked down shots, but also showed a few moves off the bounce which is new from his days at St. Andrews.

Phil Spotswood - Spotswood handled the ball well, and found teammates throughout the night. He also showed the ability to knock down shots with a hand in his face.

Scott Watson - The more he plays, the better he gets. Watson is becoming more confident in his game, which shows when he is on the court. You can tell he did not relax after July.

Dan Martin - Martin is another wing who can really shoot the rock. He is getting better and looking more comfortable from the wing everyday he is out there. Look for a big year from Martin and the rest of Tony Bergeron's boys at East Longmeadow High School.

Ben Ferris - Great athlete. Another Vermonter who plays so hard he never takes plays off. He can hurt you in so many ways.

Tyrus Weaver - Extremely fast. Pushed the break well. His on ball defense was incredible. He created a ton of turnovers and converted on the offensive end.