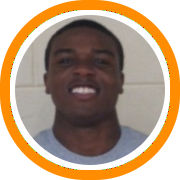 The inaugural Ballas TV Invitational got going on Friday night as two ball-games went down at the Kroc Center in Boston. In front of an impressive crowd, here's what went down...

- Electric University of Dayton-bound floor general Dayshon Smith brought his New York City-flavored game to the Bean and led his team to victory with a dazzling performance which included 21 points plus a bunch of steals and dimes.  Also showing well for Putnam was forward Joel Angus, who went for his usual unassuming double-double while big-man Ugor Hortum impressed by aggressively throwing around his big-frame in the paint on both ends.  For Brimmer, a very-active John Powell had an outstanding game as he scored the ball in the paint and from the mid-range while attacking the glass on both ends and getting at least a half-dozen blocks defensively.

- In the second game of the twin bill, Brewster outlasted WMA to win by five in what was a tight and physical game throughout.  Martez Harrison led the way from the point, scoring 20 points while doing a terrific job of dictating the pace of the game.  (There were several mid-major AC's gushing after the game as they came to press row to check on his points tally.)  Meanwhile, Kyle Williams added 11 and grabbed 11 boards  and Ron Patterson dropped an efficient 18 while also coming up with a number of steals leading to bunnies.  For Wilbraham, south-paw forward Kerem Kanter led the scoring with 16 while Mustapha Heron scored 10, Kamali Bey had 11, and Luis Montero chipped in 9.

-  Although he matched up at times with both Kyle Washington and Elijah Macon, for the majority of the game, Goodluck Okonoboh locked horns at high-altitude with Chris McCullough in what was a big-time defensive battle in which each player held the other to 5 points.  Each also were huge on the glass for their squads and registered multiple blocks, with Okonoboh finishing with the game with an unofficial 7...Elijah Macon is an absolute horse and was playing his tail off last night. Lot of high-level banging in the paint between Macon and Okonoboh in the paint...Point guard Earl Stephen provided a real spark off the bench for Wilbraham, doing a little bit of everything as he scored a few buckets from the mid-range, took care of the ball, dropped some dimes, drew a key charge, and dug out some steals...Really feel that Dayshon Smith will be playing this game for many years to come.  In the past year,he's passed a bunch of 2013 point guards as a player and he could very well pass a bunch more in the years to come...Okonoboh took an offer from Marquette after the game..Day 2 of the Event takes place tomorrow.  Stay Tuned...