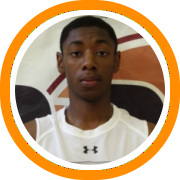 On Saturday, Day One of the BABC Prep Classic brought some of New England's top prep programs to the Kroc Center in Boston.  Here's a look at how the action played out...

- In the first contest of the day, Vermont Academy won over Redemption Christian Academy (NY) by a score of 55-47.  Leading the way for the Wildcats was Daquein McNeil, who scored 17 points, while Dimitri Floras added a dozen along with solid play at the point.  Rich Williams and George Funtarov also came through with strong games for Jesse Bopp's squad. On the other end of the spectrum, RCA was led by 20 points and a dozen boards from prized 2014 front-court prospect Angel Delgado out of the Dominican and also got a big game at the point from Boston-bred point guard prospect Mike Rodriguez.  Also making a big impression for RCA was 2015 front-court specimen Abdul Shanun, who had a number of loud finishes at the rim and played at high-altitude throughout the contest.

- In the second contest of the day, the action was neck and neck for the large majority of the game until St Andrews was able to carve out a small advantage heading into the final minutes largely behind the duo of Bonzie Colson and Henry Bolton.  However, in the final minute of the game, Wayne Selden came through with heroics which reversed the tables and allowed the Rams to pull off stunning win.  Tilton got 21 point for the game from Selden and also got 14 from Terance Mann.  Meanwhile, Tilton got another rock-solid performance at the point from Johnny Joseph while Cameron Durley broke into double-figures on the boards to provide a sturdy-anchor.  Tilton moves to 6-2 on the season within NEPSAC AA.  For St Andrews, Bolton led the scoring with 17 while Colson registered a double-double and had a crowd-pleasing two-hand jam off the catch and explode.

-  New Hampton led for the entirety of the game before Notre Dame Prep stormed back in the final minutes to tip the Huskies and earn the win.  Jamel Artis was huge down the stretch as were Jarvis Garrett and Roger Moute-Bidias, all of whom scored in double-figures along with Aaron Parks, while Jaylen Brantley ran the show effectively from the point.  For New Hampton, Travis Jorgensen exploded for 18 in the first half before the ND Prep defense clamped down to hold him scoreless in the 2nd Half.  Also breaking into double-figures for the Huskies was Tory Miller, who scored 11, and Noah Vonleh, who had 10 points and 11 boards.

- After Jacquil Taylor went down in the early minutes of the game, it seemed that Beaver might be overmatched going up against a powerful Worcester Academy ball-club, but not only were the Mariners able to stay with them, they were able to ride 'til the end and pull off the huge upset-win.  Leading the way for Juan Figeuora's squad was the back-court of Jeff Spellman and Jherson Colon, who combined for 36 efficient points, with Spellman tallying 21 and Colon netting 15.  Also for Beaver, Joe Connelly provided a long-range scoring threat throughout, finishing the game with a dozen while playing crisp team basketball, while Maurice Taylor picked up the slack inside with 12 points and 11 rebounds and Jordan Scurry also provided a huge spark late in the game with several crucial shots.  For Worcester, Rene Castro and Matt Mobley each tallied 17 to lead the scoring

Notes: Plays of the day came from Roger Moute-Bidias and Matt Mobley….Roger caught an alley way up top in transition from Jamel Artis before throwing down a crazy one-hand slam which electrified the crowd…He looked to have the highlight of the day locked up until Matt Mobley threw down a vicious one-hander in traffic plus the arm in the last game of the day.