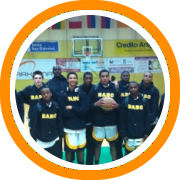 The Boston Amateur Basketball Club was selected to be the American representative at the Victor Rho International Basketball Tournament, taking place this week in Milan, Italy.

The prestigious tournament annually welcomes top international competition from around the planet.  This year, the BABC is competing in the u16 division and off to a 3-0 start as of Thursday night.  Daynia LaForce Mann, head women’s coach at Northeastern University and mother of Terrence Mann is providing daily blogs on the team’s trip and success.  Here are her updates:

Day One - Day one in Italy is over. We lost 6 hours on the flight to Milan but the boys looked ready and eager to represent their country. With little sleep they practiced hard and showed their competition (those who watched practice) they are a force to be reckoned with. We ate well! Home made pasta and real "red sauce". The boys were treated like kings by the hospitality staff. All meals prepared by an elderly Italian lady and her family. Like gentlemen they thanked everyone after dinner by shaking their hand and thanking them for what was the third home cooked meal of the day.  The boys are all together sleeping in the same dorm with Croatians, Russians, and Italians athletes. I hope they can form an appreciation for the game and for cultures they have become exposed to.

Day Two: a very eventful day to say the least. There was a huge build up to our first game. Nerves were on high and everyone including the coaches did not know what to expect from our opponents or from our boys. The coaches, including me 😉, scouted the Israeli team and the Czech team who played before us and are in our pool. We were impressed! Those boys were sharp and played hard. They executed well and were tough on the defensive end. Each team was different and displayed unique offensive styles. BABC would be tested! We were also worried because the boys did not sleep well. They were up all night and tried to sleep most of the day but were interrupted by having to eat so it was difficult for them to get the adequate rest they needed to compete at this level. Well all our worries came to an end when the ref threw up the ball to begin the game. It was poetry in motion! They boys looked in sync. They passed the ball well; defended well; slam dunked their way to a 110-11 victory. That's right... Ur eyes did not deceive you! They beat RHO BIT (Italy) with a vengeance! Even the home crowd cheered USA! But it was fun to witness our boys stay humble. They helped their opponents up off the floor when they fell and never once smiled during the melee. They knew that the best was yet to come in the future contests and they were playing to improve and to put fear into the hearts of the Israeli and Czech who were in attendance making YouTube videos of the infamous BABC dunks!  Our work is far from over and we know it. Today at 9:00 (3:00 eastern standard) we play Israel. Boys are well rested, fed like Kings and ready to battle! This is where wars should be fought... On the hardwood!

Day Three - Uncontrolled state: Defined as how BABC forces their opponents to play by pressing full court the entire game.   The Israeli team was not prepared for the pressure.  They had 22 turnovers at halftime and the boys never let up!  The final score was 82-54 and the Israelis were sent packing.  Our boys managed to perform well despite still not adjusting to the time change.  I think as soon as the horn sounded to end the game I saw them change into their pajamas!  But tomorrow is a true test of character!  Question is, can we force the Czech's into an uncontrolled state?....2-0

Day Four - At one point in history the Czech Republic was part of  the Soviet Union.  The collaboration of several European countries enforced the "red scare" on the USA.   Well tonight BABC enforced the "red scare" on the Czech Republic.   Our boys forced a total of 19 TO's and had 27 steals against one of the better teams in the tournament.  This Czech team was long and athletic but the pressure proved too much for the national team.   BABC won 88-54!  The gym was packed with spectators.  They didn't want us to win but they enjoyed the dunks and highlights of the game they only witnessed on television.   At the end of the game, everyone in the gym stood and gave the boys a standing ovation!  It really was a great moment for BABC!  Well we are 3-0 and one win away from the bronze.  But we have our hearts set on the gold!  "Gold Scare!"

Day Five - The day started with the boys experiencing the Duomo in Milan.  It was the first time the boys left their barracks  to do anything other than eat and play ball.  But during the train ride into Milan and even while walking through the Duomo, the game against Pallacanestro Cantu (Italy) was on their minds.  Tonight's late night game for BABC proved to be the last call for their opponents. However,  it was not pretty.  The boys struggled through a series of turnovers while  trying to adjust to the zone defense but it took them some time and empty possessions to realize that they were clearly better.  Pallacanestro did not give up and were excited to only be down by 10 at the half.  However, the BABC coaches went in at halftime and got the boys refocused!  They cruised to an 83-58 victory.  I could only imagine what the halftime speech was  but one thing was certain... the coaches demanded more!  The competition has turned up a notch but BABC has responded.  The final four begins tomorrow at 4:00pm.  BABC is two wins away from the finals and an opportunity to bring home the GOLD!

Day Six - With 8 freshmen and 1 sophomore BABC makes it to the championship game of the RHO Bit International Tournament!   What an achievement considering the fact that they are competing against professional teams as well as club teams who have their best players representing their country.  Our young-ins are competing and excelling amongst  the best in the world!  This is the second time in 29 years  that a team from the USA has made it to the finals.  We should all be proud!  The games are now packed with fans we have won over by our skill set and sportsman-like conduct.  Today, the "european melting pot" of cheerleaders encouraged the boys to a 88-56 win over Comark Orobica Bergamo (Italy).  With only a 13 point lead at the half BABC did what they do best!  Impose their pressure onto their opponents and completely wear them down!  Forcing 34 turnovers, the defense was impressive.  According to Coach Godwin "pressure burst pipes".  BABC's speed and athleticism  on the offensive end was simply to much to contain in 40 minutes of play!
Tomorrow at 5:30 (11:30 EDT) BABC will play Olimpia Milano Armani Junior (Italy) in the finals for the trophy and the gold medal.  But tonight we celebrate not only this win but Bonzie Colson , Tyree Robinson and Johnny Joseph selection to the All Star team!  Tomorrow we celebrate the "Gold Scare"!

Day Seven - It rained all day in RHO, Italy but the real storm came when BABC took the court to play Olimpia Milano Armani Junior (Italy) in the finals.  The thunderstorm began in the first quarter as BABC took a 19-6 lead to end the first quarter.  But the hail storm did not end there!  BABC put on a show with a barrage of offensive attacks by every player wearing black and gold.  With four players in double figures and a defensive effort only displayed by an army defending it's nation, BABC cruised to a 73-38 victory.  The standing room only crowd marveled at the execution and discipline of a well coached group of young men.  Only one American team has ever won  the gold of the Victor RHO tournament in 29 years.  It was in 2000 when a team from Utah, Timpview Provo HS, astonished the Europeans by winning the gold.  Twelve years later BABC has brought pride back to the USA. Not only did BABC demolish their opponents on the hardwood but Tyree Robinson won the dunk contest while teammate Bruce Brown was the runner up.  Jonathan Joseph was the tournament MVP and Coach Leo Papile was dubbed best coach.  A fitting end to a week of good food, great camaraderie and challenging competition.  History has been made and more importantly memories will last a lifetime.  Viva BABC!!