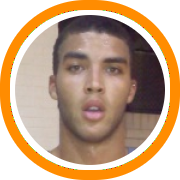 Braeden Anderson made a verbal commitment to Kansas this weekend, putting to an a long and well documented recruiting process.

The Canadian native arrived at Wilbraham & Monson Academy this September as a post-graduate, made a commitment to DePaul in the fall, and signed during November's early signing period.

Since receiving his release in January there have been a variety of conflicting reports about just who was recruiting him and to what extent.  One thing that became abundantly clear however, was that Anderson wanted a chance to play at the highest level.  Now he has it as he joins a Kansas program that is a perennial powerhouse in college basketball.

The six-foot-eight power forward averaged just under 12 points and 5 rebounds at Wilbraham and Monson this year and earning honorable mention All New England Class AA in the process.  An incredible athlete and physical specimen, Anderson undoubtedly has the physical tools for the highest levels but will need to continue to develop his perimeter skills and willingness to do the dirty work in the paint.