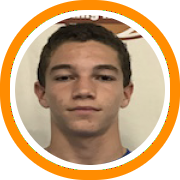 The following student-athletes shined on the opening day of the AAC:

Casey Simmons (Milton Academy, 2021)- Although Simmons possesses tantalizing potential and has improved his midrange game here at the AAC, what stands out most is the constant energy he plays with.  No matter who is he playing with, he genuinely seems to enjoy playing the game and work hard.  He is willing to get others involved, and takes pride in rebounding and defense (including a weak side block that had the crowd raising their eyebrows).

Billy Whalen (Williston Northampton, 2020)- The incoming post-graduate point guard from Hamilton-Wenham HS gets where he wants to with his dribble on the court.  A very good outside shooter, Whalen uses his hesitation & change of speed to get in the lane, and showed toughness being able to finish through contact with both hands.  A decorated high school quarterback, Whalen showed off that vision in being able to see the entire court and deliver the ball clean to his teammates for open shots.

Cam Stiepock (St. Andrew's School, 2020)- The 6'5 wing was efficient from the field.  He is shooting with much more confidence and does not need the ball in his hand to be effective.  His 3P range will be valuable to any college team, as he has earned Division II and high Division III interest so far.

Liam OConnell (Bridgton Academy, 2020)- The thick wing continued his strong play from the NEPSAC Showcase and confirmed that he can be a jack-of-all-trades player.  There isn't much he can't do on offense, and is a tough & physical defender and rebounder.  His hustle for loose balls stood out to several coaches in attendance.  He is a player that winning teams at the college level need.

Brandon Goldberg (Wantagh HS, 2020)- Coming from Long Island, Goldberg has an intriguing game.  At 6'7, he defends & rebounds at a high level, but will rebound & start the fast break himself.  Once he gets downhill, he either finishes himself (with both hands) or kicks to a teammate for an open shot.

Nolan Casey (Packard Collegiate Institute, 2021)- Unassuming on the first glance, Casey has some serious game to him.  He is a 6'6 "big" who can legitimately score from all three levels.  On the same shift, he drilled a deep 3-pointer, pulled up for a bank shot just above the block, and finished inside with a jump hook.

Jackson McKersie (Dexter School, 2022)- McKersie has worked hard to add strength to his frame.  Combined with how hard he plays, he is a prospect that will be heard from in coming years due to his toughness and improving skill.

Coby Gold (Cushing Academy, 2020)- Gold impressed more and more after each game.  His shot immediately stands out as a strength, but he ran the break well and finished inside with frequency more in the second game.

Tyler Galorminl (Middlesex School, 2020)- Armed with good positional size, Galorminl has excellent range on his jumper that will stretch the floor for his team.  Early in the camp, his shot selection impressed, as he did not look to force a shot when it wasn't there.

Ben Kaczmarek (St. Sebastian's, 2021)- The 6'4 wing showed off his jumper on Friday night, as he was a consistent threat from behind the arc, opening up driving lanes for his teammates.

Nolan Boffman (Paraclete HS, 2020)- Coming from California, the 6'1 guard is a skilled finisher at the rim.  He uses a quick burst to go by his opponents to get there, and is also capable of playing off two feet in the paint if a finish isn't immediately available.

JB Clarance (St. Mark's School, 2020)- The 6'3 St. Mark's product plays bigger than his listed height of 6'3.  He rebounds at a high rate, and goes right back up with the finish (usually through contact).

David Basich (Greens Farms Academy, 2020)- The GFA point guard consistently hit his big men on rolls off ball screens, and made the extra pass to get an open shot for his team.  He keeps his head up and sees all the action on the court as he drives into the paint.