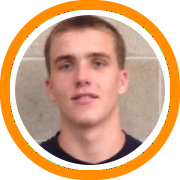 Over 300 potential student athletes and 150 college coaches attended New England's only NCAA certified camp, Hoop Mountain's All Academic Camp, last week at Brandeis University.  After three continuous days of coverage from the New England Recruiting Report here is one last look back on the event.

Anthony Green (Tilton) - The big man who will be doing a post-graduate year at Tilton immediately made his presence known on Wednesday night, and was able to continue his strong play through the week.  His post moves are becoming more and more polished, and he is now a threat to score at multiple levels.  His defensive intensity has also picked up since the end of the high school season.  Green's presence makes Tilton an immediate NEPSAC AA contender next season.

Brandon Johnson (Loomis Chaffee) - The 6'4 swingman was one of the breakout stars of the weekend.  He is a strong and physical player who absorbs contact well and has a well-rounded offensive game.  He can knock down shots from the perimeter and excels at attacking the rim.  He can also run the floor and score, and should be a key contributor for Loomis Chaffee this upcoming season.

Brandon Twitty (Catholic Memorial) - Twitty continued his strong play from the first night of camp into the home stretch.  His penetration to the basket was deadly for his opponents, and he continued to nail shots from the perimeter.

Jake Budde (Lake Travis HS, TX) - The 6'4 guard has a body that translates well to the next level.  His body control was on display all weekend.  His skill set, while solid, now, will improve with more work, and he will be very difficult to stop once he puts the two together.  Although he plays his high school ball down in Texas, he will make noise in his upcoming senior season.

Trevor Dow (Choate Rosemary Hall) - The 6'10 big man ran the floor harder than just about any guard all weekend long.  His rim-runs allowed him to get layups consistently, and his aggressiveness on defense and on the boards was noticeable.

Zach Bergeron (New Hampton) - The 6'4 guard finishes well through contact and hit more shots as the week went on.  He seemed to get stronger the more he played.  He made the right pass when he could have made a flashy pass on several occasions throughout the week.

Tyree Weston (New Bedford HS) - Weston continued to control games with his patience.  He was able to use his strong upper body to get all the way to the rim on multiple occasions and seemed to get better with each passing game as camp went on.

Quentin Bullen (Worcester Academy) - The rising senior was tough on the boards all week, getting great position for offensive rebounds by getting lower than those trying to box him out.  He used a variety of moves to get to the basket, as well, and played his usual stellar defense with his quick feet.  He showed his versatility in giving up a good 6 inches to guard Green at points.

Justin Reid (Cardinal Gibbons, NC)- Reid drew a following of coaches as the week progressed.  The 6'4 guard has a very compact shooting stroke and the confidence to make shots from all over the court.  He has a quick 1-dribble pull-up jumper that he gets off quickly, too.

Colin Dougherty (Westminster) - Dougherty had a great weekend and really helped his stock.  He plays the game hard and is in your face on defense.  He also showed the ability to knock down open jumpers as the camp went on.

*There was no shortage of dynamic duos at camp this week as multiple pairs came in as teammates or future teammates, and showed how well they can play with each other.

Pat Welch (Notre Dame Prep) & Max Curran (Pembroke Academy) – The two who won a state championship for Pembroke Academy together last season had the chance to share the court again this week at camp and they made the absolute most of it. Welch, a fierce competitor, showed off his improved physique and athleticism while pairing it with his usual tight skill set.

Jamal Lucas & Kena Gilmour (Kent School) - The two Kent guards displayed their athleticism throughout the camp.  Lucas, a lefty, showed his complete offensive arsenal, while Gilmour excelled in transition with several explosive dunks and was one of the camps shining stars all week. Perhaps the best slasher at camp, Gilmour put on a clinic in a few games by driving by defenders with ease for creative finishes at the rim. It should be an exciting season for Kent with these two guards!

Connor Merinder & David Giribaldi (Andover HS) - The Andover duo played very unselfishly all week.  Known as one of the better scorers in the MIAA, Giribaldi was able to get to the rim and pitch out to open teammates all weekend.  Not only did he shoot the ball well, but he worked as hard on defense as anyone did.  Merinder stands 6'6 with long arms, and has the potential to be a defensive stopper (at multiple positions) at the next level. On the offense level, he is the definition of consistent and while he doesn’t do anything great, he also does very little poorly.

Hugh O'Neil (Phillips Exeter) & Harry O'Neil (St. John's Prep)- Hugh O'Neil is a classic stretch 4-man with an improving skill set.  He looks much more fluid than he did last winter, and will look to improve with a post-graduate year under Head Coach Jay Tilton at Phillips Exeter.  Harry O'Neil, standing at 6'5 (a couple inches shorter than his older brother), will look to make an impact with his strong upper body and physicality inside at St. John's Prep in Danvers.

Charles & Charlie Mitchell (New Mission) - Only rising sophomores, the Mitchell twins each excelled against bigger and older players over the entire camp.  They are both quick off the dribble and are always looking to get their teammates involved.  Both play with such a high energy level and are devastating on the press.

*While all of these guys had great weeks for themselves, they all have one thing in common: we think their best basketball has yet to be tapped or noticed. These guys are sometimes young, sometimes late bloomers physically, or perhaps are just flying a little bit under the radar currently.

Jack Zimmerman (Bishop Guertin) - The New Hampshire native did not use the traditional "camp setting" as an excuse to change the way he plays.  He got open teammates involved and was able to get to the rim and finish.  He is ideal for playing with talented teammates due to the fact that he does not care about his stats or his shots.

Cooper Griffin (Charles Wright Academy, WA) – A lights out shooter who possesses a great feel, Griffin has all of the tools to be a great player except for the body. However, he definitely doesn’t look done growing, and as his body fills out and matures he has the potential to be a very good college prospect. We heard a few different accounts of how hard this kid works and in the end after he grows and physically mature, that effort and skill set will win the long term battle.

JD Levine (Poly Prep, NYC) – The undersized guard is a wizard with the ball and had a tremendous three days in Waltham. He has a smooth and fluid jump shot that is equally as effective off the dribble as off the catch, and really knows how to control the tempo of a game.

Nick Tupanjanin (Milton Academy) - The 6'2 guard is very athletic and consistently got to the basket and made plays.  He is also quick in the open floor and gets the ball to an open teammate for a layup or open 3-pointer.

Jordan Mello-Klein (Thayer Academy) - One of the youngest players in the field, the rising sophomore is a talented passer who sees the whole court at all times. The future looks bright for Thayer Academy with this guy at the helm.

Michael Grassey (Winchester HS) - The rising junior tallied consistent 3-point totals all week which excited college coaches who see is potential as a stretch four. Grassey, a strong 6’5” forward who has toned up his body immensely in recent months, also is a great passer out of the post who is comfortable down on the block as well.

Sam Jefferson (Newton North) - Jefferson shot the lights out from deep all day on Thursday, but showed he could hit the midrange jumper on Friday morning.  He has a great feel for getting open and gets his shot off quickly with his quick footwork.

Vincent Conn (Rye Country Day) - Conn is explosive and knows how to play the game.  He looks to push the ball in transition and has a nice array of floaters.  His jump shot makes him a threat on the perimeter, too.

Ben Shungu (Rice HS)- Shungu parleyed his great Friday night into an impactful weekend.  Like many true point guards do, the Vermont makes the right pass at the right time to the right player.  His ability to get in the lane and kick to his teammates was noticeable, too.

Koree Hargraves (Canterbury) – He is an unshakable point guard that showed he has a variety of offensive skills that could make a college coach very happy. Hargraves is a good passer, can penetrate the scoring area with consistency, and has range out to the 3-point arc.

Sean Mckinless (St. Joseph Regional HS, NJ) – A quick and crafty point guard with tremendous court vision, Mckinless demonstrated his ability to run a team at camp. He is always pushing the tempo, and he is one of those guys that his teammates love to play with due to his unselfishness.

Will Muldberry (Verona HS, NJ) – Muldberry, your prototypical glue guy, was extremely consistent and effective with his play. He rebounded the ball well on both ends, really competed defensively, and did a good job of using his strength to finish around the rim. Muldberry also showed a developing shooting game

Chris Downing (Don Bosco) – He has excellent footwork and combined it with a soft touch around the rim. Downing has a full arsenal of post moves and combines it with a great motor and basketball IQ. He also did a great job of controlling the glass when we saw him play.

Justin Guerette (Cape Elizabeth HS) - The rising junior from Maine has improved his skill level every time we have seen him recently.  His hard work is paying off, and his recruitment should see an increase in production this winter.

David Carbonello (Windham HS) – A long guard with a good skill set, Carbonello proved why he will be one of the better returning players in the NHIAA. He hit a number of shots and also mixed in some nice drives to the hole.

Yannick Williams (Holy Cross, NY)- Coming in from Queens, NY, the 6'5 rising junior has great physical potential with a long frame that will fill out with time.  Once his skill level catches up, he will make some noise for Holy Cross.