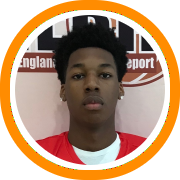 The 2018 Elite 75 College Showcase hosted some of the best rising seniors and post-graduates in New England in with over 60 college coaches from the division II and III levels looking on.

After first profiling the bigs and the forwards, we’ll now turn our attention to the wings who stood out on Tuesday night. This was a deep group that included some already well established prospects with scholarship offers on the table and others fighting to make a name for themselves.

Tedrick Wilcox, Rocky Hill School - Coming off a strong spring season with his RI Elite team, Wilcox continued to impress coaches and attract more college interest on Tuesday night. The 6-foot-5 wing is an extremely high level athlete with great leaping ability and a quick first step. He shoots the ball with range but also made a number of heady passes to grab coaches’ attention.

Chris Camille, Hamden Hall - A strong and physical wing who loves to get to the basket and can finish high above the rim, Camille was one of the most physically gifted prospects in the field. He was in attack mode on every catch, played through contact like few others, crashed the offensive glass, and even knocked down some jumpers.

Christian Adams, Hamden Hall - The 6-foot-4 Hamden Hall product has made the full transition from an interior forward to a full-time wing who can handle the ball, shoot it consistently, and rise up for tough shots off the bounce. Adams impressed coaches with his strength and scoring ability as he looks to add to the list of scholarship offers that he has already received.

Sean Conway, Cushing Academy - Coming off a huge high school season, the incoming Cushing Academy post-grad stood out in a gym full of New England’s best prospects. The 6-foot-3 guard is known for his jumper but showed off a versatile scoring arsenal while also doing a nice job of rebounding the ball from the perimeter.

Aaron Gray, LaSalle Academy – Gray has an impressive physical profile with good size on the wing, a great basketball body, and smooth athleticism. He also played hard here and caught the attention of a number of the division II coaches in attendance.

Arie Breakfield, Spaulding - One of the top prospects out of New Hampshire, Breakfield is a jack of all trades. He has good size on the wing, uses his length to get to the basket, and is capable of taking the ball off the glass and leading the break himself. He’s also unselfish and able to make those around him better.

John Lowther, Hingham HS – Lowther capped off a productive spring with a strong showing here. He’s transitioned to the perimeter successfully and can both make jump shots and dribble drives. Combine that versatility with his deceptive athleticism and his game continues to go to new levels.

Matt Relihan, St. Andrew’s – The St. John’s Prep graduate, and incoming St. Andrew’s post-grad, is a great three-point shooter off the catch who can also attack close-outs and score around the basket with a variety of finishes. Defensively, he has the size and versatility to guard multiple positions.

Kani Glover, Bridgton Academy – Another MIAA standout headed to the prep ranks, Glover uses his elastic frame to make a number of impressive athletic drives while also showing an ability to create for others. He used his length and mobility well defensively and got on the glass as well.

Trey Ballew, Portland HS - One of the top players in the state of Maine, Ballew typically plays inside during the high school season but impressed with his perimeter play here. He’s a talented playmaker and passer for his position who also owns a muscular frame to carve out space and bully smaller defenders.

Sean Braithwaite, Center Moriches NY - Coming all the way from New York, Braithwaite made a name for himself as an athletic, well-rounded wing who can score in bunches. His impressive performance led him to walk away with interest from several scholarship level schools.

Ian Jennings, Milton HS - The Milton, Vermont product made a name for himself with a strong body and good skill set. He has deceptive length and good instincts both offensively and defensively. He handles the ball well but is valuable around the rim on the defensive end with deceptive shot-blocking ability.

Max Kiehm, Proctor Academy – Kiehm was one of the best, and most consistent, shooters in the gym on Tuesday night. He wasn’t just virtually automatic when able to step in but was also able to create space with his jab and make deep threes from a couple feet beyond the arc.

Justin Radford, Platt – A long and lanky southpaw, he has good size at 6-foot-5 and the potential to play multiple positions as his frame fills out. He has clean mechanics on his jumper and potential as a shooter, good intangibles, and definite physical upside.

Keyshawn Kirkland, Winchendon – An already versatile player with plenty of upside still left to discover, Kirkland went down early with an injury but not before he had made an impression. He’s athletic, effective in the open floor, potentially able to play multiple positions, and just scratching the surface.

Jahden Erold, Woodstock Academy - The Natick graduate and incoming Woodstock Academy post-graduate has good perimete size at 6-foot-3, a lively body, and tools to impact the game at both ends. He defended, rebounded well, and knocked down a three before the day was out.

Keenan Marseille, Hyde - His body is coming at a rapid rate as he's powerful, explosive, able to get down hill, and then finish above the rim with authority. He'll join what is shaping up to be a very good Hyde program next season.

John Packard, Wilbraham and Monson – Packard has a strong, college ready, body and an ability to make tough shots in bunches with deep range and a quick and high release. He also possesses a good overall basketball I.Q.

Mark Barrett, Brookline HS – A crafty wing with a scoring mentality, the 6-foot-5 Barrett has good positional size, a knack for creating his own shot, and an ability to make tough shots.

Eamon Fitzpatrick, Cheshire Academy – His competitiveness stood out as he held his own against some of New England’s best while also showing off an improved offensive skill set including enhanced playmaking tools.

Michael Perry, Tabor Academy – A true competitor, Perry is a scrappy and hard-nosed lefty who plays hard, defends, and rebounds. Offensively, he loves to create contact going to the rim and can finish through it.

Kyle Haberle, Smithfield – What he may lack in size he more than compensates for with a wealth of intangibles. Haberle is a physical wing who is strong and tough with a high basketball I.Q. and great feel for the game.

Jalen Williams, Simsbury – Williams made a well-rounded impact on Tuesday night showing a solid shooting stroke, rebounding the ball consistently, and playing with a high motor throughout the course of the event.

Precious Okoh, Springfield Commonwealth - A "wing guard" who is scrappy enough to defend bigger players, Okoh was a standout for SCA's regional team this year with his shot-making but really differentiated himself on the defensive end in this setting as he was all over the ball and very active.

Sean Menard, Pembroke Academy - Menard may be a little undersized for the wing and not overly explosive, but he's strong, tough, and has a pure stroke from behind the arc with a very soft natural release.