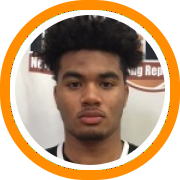 The 2017 Zero Gravity Prep Classic wrapped up on Sunday at St. Andrew's School in Rhode Island as college coaches, fans, and evaluators continued to pack both gyms to see top talent from New England and beyond. Here's a look back at the action.

Gould Academy 76, Cheshire 65 - After being down by 7 at halftime, Gould Academy was able to come back and beat Cheshire thanks to the play of Daniel Buie and Wildens Levesque. Buie dropped 18 points and controlled the game while Wildens added 22 of his own and was dominant in the paint both offensively and defensively. Despite losing a force in Jamaal Waters due to injury early in the second half, Cheshire was able to keep the score within 5 points until the last minute.

Athletes Institute 68, Dexter Southfield 48 - Athletes Institutes came to play today as they dominated throughout the game. Although Dexter was down early, the energy remained high throughout the game. Lugentz Dort of Athletes Institute was a stand out as he scored 24 points and had numerous rebounds. He also kept up the pace of the game and was constantly pushing the ball and creating opportunities for his teammates. From Dexter, Noah Kamba had a great game, adding 15 points and facilitating Dexter’s offense, while remaining solid on defense.

Lincoln Academy 71, TRC Academy 54 - Lincoln Academy made a statement in this week’s ZG Prep Classic as they won both of their games. Zero Gravity Player of the Game guard Myreon Jones led the way by scoring a game high 29 points while connecting on 5 made three pointers. Big Man Moulage Sissoko was also impressive as he was a force inside rebounding and blocking shots and did a great job running the floor. TRC Academy guard Antoine Vernon finished with 12 points to go along with 4 assists and 2 steals. Forward Adong Makuoi contributed 9 points to go along with 5 rebounds.

South Kent 80, Worcester Academy 63 - South Kent was able to pull away in the second half after being down one at halftime thanks to the excellent offensive performance by Malachi de Sousa who dropped 43 points in the game. Worcester Academy was led by Quest Harris and Judson Martindale. Harris was able to push the ball and facilitate play, while Martindale scored 17 points.

Lawrence Academy 70, Lee Academy 58 – LA scored an upset behind ZG Player of the Game Joey Luchetti who finished with 18 points and 8 rebounds and anchored the team on both ends of the floor. Big fella Travell Washington contributed 17 points to go along with 7 rebounds and a game high 3 blocks. Lee Academy PG Jordan Means scored a team high 16 points while connecting on a couple of three point attempts while backcourt mate Edgars Kaufmanis finished with 13 points on four threes.

Tilton School 84, Cushing Academy 71 - After being down by 6 at halftime, Tilton was able to come back from the deficit thanks to suffocating defense and a fast paced offense. Marcus Zegarowski created high percentage shots for his teammates, while also scoring 13 points himself. Max Zegarowski added 16 points of his own. David Duke led Cushing with 16 points while his explosive offense and ability to convert three-point plays kept the Penguins in the game in the second half.

Putnam Science Academy 108, Southwest Basketball Academy 57 – PSA was on fire for this game while their defense proved to be nearly impenetrable as they shut down Southwest and challenged every shot. Josh Mballa had a great game for PSA as he totaled 12 points and was a force in the paint. Thomas Kennedy scored 10 points and had a solid floor game for Southwest.

SPIRE 91, Our Savior 85 - Zero Gravity Player of the Game Caleb McConnell had a game high 30 points to go along with 7 assists in the highest scoring game of the day. Dom Welch was also productive by scoring 12 points to go along with a game high 5 steals, leading a strong supporting cast as five players finished in double figures. Our Savior guard Boubacuer Kamikiso led the way for his squad scoring 22 points, including three threes, and pulling down 6 rebounds.

St. Andrew’s School 91, RISE Prep 76 - St. Andrew’s seemed to take advantage of their home court as they had a stellar team performance and an excellent shooting night all around. Cole Swider led the way with 34 points, 21 of those points coming from behind the arc. Brycen Goodine also had a great offensive performance, dropping 30 of his own points. Rahmir Moore of RISE Prep was another offensive talent in the game, dropping 27 points for RISE.

Kings Christian 51, Notre Dame Prep 50 – This one came down to the wire before Kings Christian was able to pull off the narrow upset. Coleman Stucke earned Zero Gravity player of the Game as he scored a team high 20 points along with 6 rebounds and 4 assists. Luke Sakota chipped in with 15 points and 4 rebounds of his own. Notre Dame Prep guard Saquan Singleton finished with 15 points to go along with a team high 6 assists. He kept his team in the game by also doing a great job being a facilitator and finding teammates for open shots.